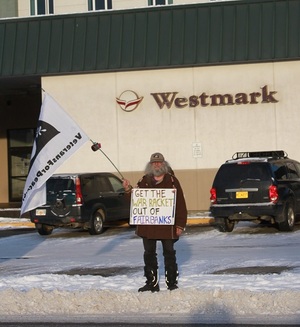 This past Oct. 3rd and 4th the Fairbanks North Star Borough (FNSB) (equivalent to county in lower 48) and an organization calling itself the Association of Defense Communities (ADC) held a joint conference along with representatives from the uniformed services, local politicians, bankers and businessmen at the Fairbanks, Westmark Hotel, titled the Alaska Defense Forum. The Borough touted the meeting as providing "state and local leaders with strategies they can use to build strong military-community partnerships and rally new defense community champions at the state and local level."

A YouTube video advertising the event produced by the FNSB starts, quoting General Billy Mitchell saying, "I believe that in the future, whoever holds Alaska will hold the world".

Being viscerally affected by the recent murder of over thirty pine nut farm workers via a U.S. drone strike, I could not allow this attempt to further militarize our local community and its economy happen without protest. So I decided to perform a little street theater at the entrance of the hotel. Not blocking the entrance nor directly in front of the doors, I stood wearing a sandwich board that said (on the front) GET THE WAR RACKET OUT FAIRBANKS and (on the back) WARFIGHTER WANT OUT? CALL 877-447-4487 (the GI Rights Hotline). I also carried a Veterans For Peace flag, on which I attached a small but fairly high quality amplified speaker and an MP3 player, on which I had loaded Buffy Sainte-Marie's "The War Racket". As folks were entering the hotel I marched (danced) back and forth to Buffy's awesome tune.

At one point, a past FNSB Mayor walked by and I greeted him with, "Well, if it ain't the old warmonger Luke Hopkins." He replied, "I hope you'll be able to keep warm." I actually took his comment to indicate that he was showing friendly concern for my well-being, the weather, outside of the covered area where I was protesting, was below freezing and a light ice fog blanketed the area. I should mention here that when Luke Hopkins was Mayor he was a leader in an effort to have a large military industrial drone base constructed forty miles south of here in the community of Salcha. I and a fairly large contingent of irate Salchans squelched his, the University's, Lockheed Martin's, and the Military' efforts. Since then, I believe he has carried a degree of resentment. I should have taken in-consideration his grimacing expression, for a minute or two later, hotel security approached and told me that I was trespassing, had to leave hotel property, and to take my protest out to the public sidewalk on an adjacent the street.

I disagreed, saying, "This is an advertised public event. I am exercising my human right of free speech and my political right to petition."

The hotel security employee replied, "This is private property. Would you accept me coming onto your home property to protest?"

I answered, "If a meeting is going on in my home between the military, bankers, businessmen, and local government officials, all engaged in war racketeering, you are most welcome to protest there." 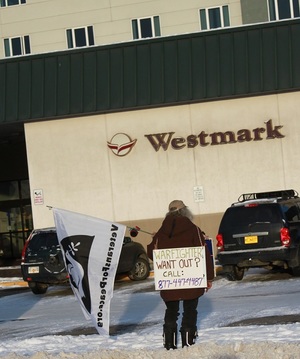 Security then informed me that he would call the Fairbanks police. I invited him to do so. When the city police officer arrived he informed me that I was trespassing and that I had to leave the property or I would be arrested.

I told him, "This facility is hosting a Borough advertised public meeting. I have a right to protest. Get the mayor."

He replied, "You are trespassing. You have to leave."

I, again demanded, "Get the mayor."

He then ordered, "You have thirty seconds to leave the property, or I will place you under arrest!"

I then sat down on the sidewalk and pressed the play button on the MP3 player. The policeman asked, "Are you going to leave?"

He then ordered me to put my hands behind my back, at which time I made myself go limp; falling onto my side, my hands underneath me. I remained limp as he pulled my arms from beneath me and then handcuffed them together. About this time a second policeman, who had arrived on the scene just moments earlier, proceeded to retrieve my sandwich board, VFP flag, and MP3 player, playing Buffy's tune. I could see the second policeman's facial expression as he lifted the flag, Buffy's voice crying out, "And, that's how it's done; and you got our sons, in the crosshairs of horror, at the end of your guns!" He appeared visibly affected; I would venture to say, quite distraught; the second policeman then disconnected the audio cable between the MP3 player and the speaker. After loading my possessions into his patrol car the second policeman assisted the first, carrying my limp body and placing it thoughtfully into the backseat of the first patrol car.

As the first officer prepared to pull out of his parking spot, he explained to me that he was taking me to the Fairbanks Correctional Facility, where I would be processed, and then released upon my own recognizance. He then explained that if I was to make it to the station before five P.M., I could retrieve my belongings; if not, they would be sent-off to be held as evidence.

On the way to the jail, the two of us made some small talk – I had taken notice that his surname was the same as one of my most favorite jazz musicians. He then asked me if I was a veteran. I replied that I was. We then shared just a little about our service. He had retired out of the Army before becoming a policeman.

Driving through the gates of the jail, he said, "I want you to know that I respect you for having the courage to stand for what you believe."

Later that afternoon, I had to wait for the second policeman to return to the station, as he had been carrying my protest materials in his squad car for the past few hours. Upon his arrival, bearing a residual of his earlier expression, he politely but quickly handed me my belongings, and then left in his patrol car. It was then that I noticed that the MP3 player was missing. I informed the desk, and they radioed him back in. After finding the player under his car seat he handed it to me and said, "I disconnected it from the speaker because I was concerned that it would run out." I, again, took notice of a sadness lingering in his facial expression. Although he had not told me so, I believe that he, also, was a veteran.

Would I have been treated as well, if I had been a person of color, say an Alaska Native? I don't know. Our history does not bear well to that effect.

I have been arraigned and charged with Criminal Trespass II, a class B misdemeanor. So far, I have filed court records announcing my intention to defend myself before a jury. I have also filled my intention to proceed with a positive defense, focused on the reasons for my actions, and based upon public records; starting with a congressional report on the Sand Creek Massacre; as well as personal experience, including those experiences that I gained in Pakistan, Palestine, and Standing Rock. It is my intention to link the Doctrine of Discovery, crimes committed at Sand Creek, and the murder of over thirty pine nut farm workers in Afghanistan. My intention is to shed light on the criminal racketeering that I was protesting. I have also declared my intention to use my protest props, including the playing of Buffy's tune, The War Racket, and showing the afore mentioned Borough video in the court room. It is my hope to get a good relative proportion of veterans and active duty servicemen on the jury.

The court documents that I have filed include the following statement on the signature page:

I, ROBERT STEVEN MULFORD, acknowledge that the land I occupy, known as Fairbanks, Alaska, is the un-surrendered traditional territory of the lower Tanana Dene Peoples and the Dena'ina Peoples.

'Till Selfish Gain
No Longer Stain
The Banner Of The Free,
Rob Mulford,
robmulford-1979@runbox.com