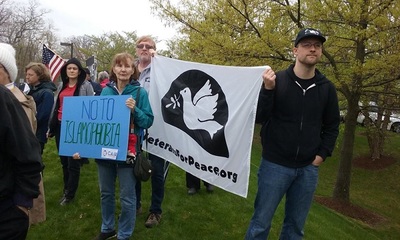 Veterans for Peace of Western Pennsylvania took part in a peace protest in the Pittsburgh area on April 26, 2019. Organized by the Pittsburgh chapter of the Council on American-Islamic Relations (CAIR), the protest originally aimed at taking a peaceful stand against Fox News commentator Jeanine Pirro serving as speaker at the St. Barnabas' Founder's Day fundraiser because of her recent controversial comments regarding the Islamic faith. Pirro ended up canceling her appearance due to the death of her mother, but the protest went on as planned.

Quoted in the Pittsburgh Post-Gazette, spokesman for the VFP Western Pennsylvania chapter Dan Galvin said, "As veterans dedicated to preventing violence, we stand in support and solidarity with CAIR against someone who speaks against Muslims and other religious groups. ... Hate speech toward any group is unacceptable."

Several other social justice organizations and a number of individuals rallied alongside CAIR and VFP in the demonstration.