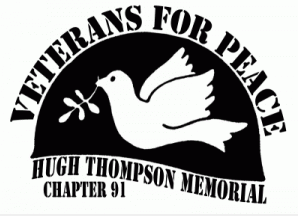 Around 8pm on Wednesday December 26, 2018, Veteran's For Peace members Gary, Jack and I made an excursion to downtown San Diego.  We were in search of San Diego's homeless population.  In tow we carried sleeping bags and warm socks to give to those in need.  We arrived in a section of downtown that has been heavily gentrified in recent years.  There were modern high-rises, standing and under construction.  There were fancy restaurants, hotels and clubs.  But there were still many older houses, buildings and churches, some of which fed and housed the homeless.  It gave the appearance of a sea of affluence along with its security details but scattered throughout with homeless people, slowly bedding down for the night.

Many of the homeless were women. One of the women we encountered was working full-time in security and also attending school.  She couldn't mention being homeless at work because she's sure she'd be fired.  She's been homeless for several months and mentioned how much she hates being on the streets.  It was moving to see her doing everything she could to change her circumstances.  When Jack asked her if she felt relatively safe she responded that she was under a street light and that helped protect her since predators like to work in the dark.  There was another woman a few yards away under the same street light.  Her face was badly bruised and there was evidence she recently had a bandage near her eye.  She was extremely grateful for a sleeping bag.  The first woman seemed very protective of her as I noticed when we were leaving her trying to shoo away a man who had just arrived by bike and had planted himself on the edge of her thin blanket.  I thought later that maybe he had something to do with her badly bruised face.

There was one woman sitting all alone on just the bare sidewalk.  After giving her a sleeping bag she explained that a week ago someone had stolen her purse with everything she had.  Then there was a young couple.  They decided they would share a sleeping bag and she was so grateful to get one that she was moved to tears.  One gentleman was in dire straits as his left leg was wedged high up between a fence post and a building, apparently he was seeking a short cut to his destination.  We all pitched in and even another homeless man came over and helped us free him from his plight.  Jack, as he did with all carefully chosen prospects, assessed he didn't have a sleeping bag and so we gave him one.  We came upon a woman, already bedded down for the night in an old blanket.  We gave her a sleeping bag and she reached out for both Jack's and my hand but was having difficulty in finding mine, as though she had a vision impairment, then proceeded to tell us to pray for her young daughter who was due to give birth in February.  Jack later mentioned how courageous she was to be thinking of someone else when she herself was in such a distressed state.

A few feet away from the woman stood a man of strong stature and with him were two dogs.  He told us that the larger dog was especially trained to sense if someone was having a heart attack, etc, because humans emit an endorphin that the dog can detect and therefore alert of the impending event.  We spoke with the man for a time and were amazed at how knowledgeable he was about the politics around the homeless in that area and that everyone involved was profiting from homelessness.  He mentioned that city had worked out a way to help house the homeless but that the local churches that housed and fed the homeless stood in unison against the program.  He was of the opinion that it would have stepped on their turf and cut into their ability to make money from homelessness.  We thought that very interesting.

We met other homeless people as well and one thing that struck me was the relative short amount of time that most of them had been on the streets, as in the case of one gentleman who had been homeless for just one and a half weeks.  My overall impression was how getting close to and getting to know the homeless had the effect of humanizing and individualizing them.  It was an eye-opening and moving experience.