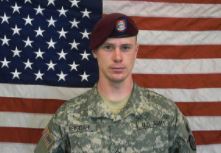 President Donald Trump has reaffirmed his prejudicial statements against Sgt. Bowe Bergdahl, prompting an 11th hour motion by Bergdahl’s defense team.  Trump referred to his previous statements calling Bergdahl a “cowardly traitor” who should be executed.

See article in Stars and Stripes.

Making these statements as a candidate is one thing, said Court Martial’s presiding officer (judge), Colonel Jeffery Nance, in ruling against a previous motion to throw the case out because of undue command influence.  But if Trump were to make these statements as President, said Col. Nance, he would have to reconsider his ruling.  Well, Trump has now said it as President. At a televised news conference in the White House Rose Garden on Monday, Trump responded to a question about Bergdahl as follows”

“I can't comment on Bowe Bergdahl because he’s — as you know, they're — I guess he’s doing something today, as we know,” Trump responded. “And he's also — they're setting up sentencing, so I’m not going to comment on him.But I think people have heard my comments in the past.”

Veterans For Peace is appalled by Trump’s outrageous statements.  We are totally opposed to the U.S. government’s persecution of Bowe Bergdahl, and scapegoating him for its failed illegal war in Afghanistan, which continues to this day. We join Bergdahl’s defense attorneys in calling for the court martial case to be thrown out.

Bowe Bergdahl Speaks in his Own Defense

In his interview with ABC Nightline show, Bowe Bergdahl responds to those who call him a traitor, and explains why he saw no option but pleading guilty.  The video also shows how he has suffered greatly and deserves to suffer no more.

To write letters of support to Bowe: