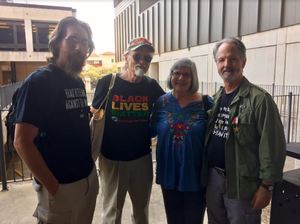 Came home wishing hard for a beer tonight. KLRU Austin's milquetoast preview of the Burns tripe on Viet Nam would have been dissatisfying enough of itself, but the second film "Austin Revealed", featuring local folks who were impacted by the war, was Freshman level Journalism textbook nonsense: "balance", "journalistic objectivity" "both sides". The low point of the evening was when a South Vietnamese Quisling said repeatedly, "There never would have been a war if that Ho Chi Minh (all but spitting Uncle Ho's venerated name into the air) had not brought Communism to Viet Nam."

The evening was redeemed by the Q&A period wherein Veterans For Peace Past National Board Member Alan Pogue spoke eloquently of the enlisted Soldiers' frustration in light of the Military's incoherent strategy and useless tactics and Alice Embree, who appeared in the film discussing Austin's anti-war movement, also introduced another former VFP Board Member, Hart Viges, and spoke of his involvement in going into schools to educate young people regarding Sustainable (nonmilitary) Options For Youth.

Other positives: Our copies of the "Full Disclosure: Truth About America's War in Viet Nam" were well-received; all the copies were taken. AND ... I saw about a dozen comrades from my years at the Austin Peace and Justice Coalition for the first time since I had left for Oakland in 2001.