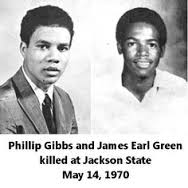 In the early morning of May 15, 1970 two young Black men were slain and twelve young Black people were wounded at Jackson State College by Mississippi State Police and Jackson City Policemen. At 8am that same day I was discharged - “honorably”, they said, as a Conscientious Objector - from the United States Marine Corps.

For at least twenty years following that date I often introduced myself or was introduced as a dissident, anti-war Marine who had been “discharged in the same month of the killings at Kent State”. Throughout those years I countenanced, and indeed contributed to, a narrative - “Four dead in Ohio”. “They hadbegunkilling students!”   This particular narrative makes little if any mention of the Jackson State deaths and never, within my hearing range, of the deaths of the Black students at Orangeburg State College in South Carolina in 1968, where three had been slain and twenty-eight wounded. 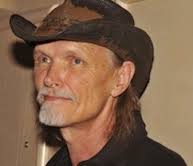 Although I had been raised until age 13 within a hateful, deeply racist church in the South and had been heavily propagandized to fear, mistrust (and exploit?) People of Color, at 20 years old mine was no longer the virulent Racism of a committed White Supremacist. Between the ages of 13 and 20, years wherein many of my material, emotional and social needs had been met by folks like those I had been taught to despise and denigrate, I had learned to question the “Biblical” and pseudo-scientific racism I had been taught.

I had lived in a mixed-race household and I had learned to love my second generation immigrant Stepfather, Jose Del Real, who had rescued us from the Texas orphanage and made a home for us in San Bernardino, California. I had begun to imagine a mixed race family of my own, a daydream that was later realized. I had enjoyed attending school in the inner city, schools full of poor children from all racial backgrounds. I had also traveled across the Southwest for one year embedded in a migrant community of dozens of illegal Mexican immigrants, building highways and witnessing the racism directed against the Norteno immigrants and the class prejudice our entire crew met in every Texas town, large or small, rich or poor. Over those years I was exposed to many multi-racial and multi-cultural understandings and lifestyles and I had learned a little and grown … some.

Nineteen years old in early 1969 and in Marine Corps Boot Camp, I earned a Meritorious Promotion - awarded to 10% or fewer of each graduating Company - by resolving violent episodes caused by racial tensions in my Platoon. I did so by making clear to all the recruits in my squad what we all had in common was surviving Boot Camp having suffered the least possible abuse and torture from the Drill Instructors. I went on to say that everywhere that poor children attended school together we had all been taught that we were too stupid to learn. I then taught my cadre memory tricks I had picked up along the way and, to a man, we aced the drills on weapons systems specifications. After that we were able to rally and win all the remaining Company competitions. My role did not go unnoticed and at graduation week I was presented with my first USMC promotion from Private to PFC. I thought very highly of myself at the time.

Upon returning, in March of 1969, to our next station after Post-ITR leave, a significant portion of the Marines I had been in Boot Camp with reported that there was something rebellious, even insurrectionary, brewing in their parts of the “Real World”. I, for one, had discovered that every single one of my friends from High School had been radicalized and were actively opposing the “American War” in Vietnam. Beverly P. and Tommy R. took me aside and asked, “What is your position on Vietnam, Doug? Do you really plan to serve another 3 and a half years in the Imperialist military?” I had no idea, before that moment, that it mattered to anyone anywhere what I thought or that Imperialism had survived the last decades of the 19th Century. I went AWOL briefly, hanging out with student activists, and returned to the Marines a few weeks late; luckily nobody noticed.

Upon my return to barracks life I discovered that I had a lot of good company among Marines and Sailors who were beginning to share subversive anti-military literature and to forgo the usual drunken debauchery for serious enquiry and for political action. I began reading dissident literature of several varieties smuggled onto base by Marines and our off-base allies in the peace movement, favoring Marxist interpretations to others. One particular group that I was challenged (and puzzled) by were the Black “in-country” Marines who were restlessly awaiting their dates of discharge and already getting involved in the radical Black resistance in Southern California; Watts was just down the road from MCAS El Toro.

One Black comrade gave me a copy of “Soul on Ice” and I was dumbstruck to read that Eldridge Cleaver had written that Black people in the United States were the recipients of a “Higher Uneducation”. The systematized depth of forced illiteracy, the continuity throughout generations of the effects of racist practices and institutions, the indomitable resourcefulness of Black Resistance … these were matters that I had never heard addressed. Also, Black Marine dissidents were speaking of the war in Vietnam as a racist war and insisting, as Muhammed Ali had, “I ain’t got no quarrel with the Vietcong …  No Vietcong ever called me Nigger.” Inspired, in no small measure, by the sacrifices that Black radicals spoke of making for their people, I soon decided to resist the War and, expecting to go to the Brig for Life, I announced to my Commanding Officer that I would no longer obey Marine Corps orders.

Much to my surprise, I was placed on House Arrest while supportive Officers sought to have me discharged as a Conscientious Objector, something that had never occurred to me, something, in fact, of which I had never heard. After delay upon delay involving a bevy of psychiatrists and chaplains, I had begun to lose hope that my C.O. application would be approved. To make matters worse, on May 4, 1970 four (White) students had been murdered by National Guard soldiers at Kent State University in Ohio. Those killings had inflamed that small section of my Unit’s Enlisted barracks that was occupied by White anti-war dissidents. “STUDENTS?! THEY’RE KILLING STUDENTS?! THAT CHANGES EVERYTHING!”

The anti-war chatter in the barracks picked up exponentially. Several Marines stopped by our quad that week to make enquiries about all the alternative tactics that we might employ to escalate our various plans for getting out of the Marine Corps. Two Marines who had already begun processing for Undesirable Discharges for drug abuse (and would have been released within the month) spoke instead of deserting and going to Canada; for the first time I began to imagine taking that path. I had fully intended to continue my confrontation with Herod and Pilate (in Pentagon form), but if that conversation had been derailed … what, then, remained of any obligation I had previously felt toward Rome?

Then suddenly my discharge arrived and I was released, a free man, early in the morning of May 15, a few hours after the slaughter at Jackson State College.

I heard nothing about the killings because I had immediately found my way to the Interstate highway and hitchhiked back to my Grandparent's ¼ Section farm 8 miles outside of Blue Ridge, Texas and a Century or more “behind the times”. Exhausted by a year-long struggle, first within myself then between myself and Marine Corps authorities, still spinning from a country boy's encounter with the worlds and ideas of Karl Marx and Eldridge Cleaver, I longed for simplification. For four months I went to bed with the chickens and awoke at the first hint of Dawn, settling into the rigorous work and the Zen state required of a hired hand in the Blackland Prairie.

That Fall, I entered college as a Freshman at the University of Texas at Arlington and, once activists learned of my CO Discharge, was drawn into the peace movement and handed a microphone.  Adapting to the popular discourses among the hundreds of (95% White) peace activists at my college and throughout the country, I soon learned to introduce myself (to 95% White audiences) as a dissident Marine, who had been “dischargeda few days after the killings at Kent Stateas a Conscientious Objector”. That was always an effective, easy device for pulling my audiences into my story.

It was also racist.

Never once did it occur to me, in those days, to say “I was discharged from the Marines on the very day that the two Black martyrs were murdered by Policemen and Highway patrolmen at Jackson State College, continuing the police tradition established at Orangeburg State college in South Carolina in 1968”. Nope. As a matter of fact, although I was vaguely aware that there had been an incident of violence at Jackson State involving dissidents and that students had died, I did not make the connection between those killings and Kent State, nor did I notice that they had occurred on the precise day of my discharge.

It was much later, during the early 1990s, that I had the opportunity, in coalition work with revolutionary feminist females, mostly women of color, at the Foundation for a Compassionate Society in Austin, Texas, to explore the complications and contradictions within my “story” as I “remembered” it and represented it. At about that same time I became a principal caregiver for my Black Five-Year-Old stepdaughter. It was through my day-to-day life with her that I began to observe other White people responding, often unconsciously, as if this sweet little girl were somehow a threat to them. Then, after we moved to Oakland, California, I began to witness in myself the same fearful reactions that I had so roundly condemned in fellow Texans. Oakland is a wonderful city of resources for transformation and I found courageous and fierce allies there to help me to unpack that fear, to recognize it as my recidivist racism (“Who, me?!”) and to begin systematically confronting and deconstructing the unacceptable contradiction.

Today, I am more fully aware of the significance of the racist-driven events in those times and of my own recidivist racist myopia. Any and every time that I hear Kent State mentioned, I am compelled to speak of the South Carolina State February 8, 1968 slayings of Henry Smith (21), Delano Middleton (17), and Samuel Hammond (18) who was murdered the day after his 18th Birthday. My bio mentions that I was discharged from the Marines on the exact day of the May 15, 1970 Jackson State killings of Phillip Gibbs (21) and James Earl Green (17).

I also make a point to recall, with all due humility, the horror expressed by my White Marine allies (and myself) upon learning, two years plus after the Orangeburg killings, that government forces had [begun] killing students!”.