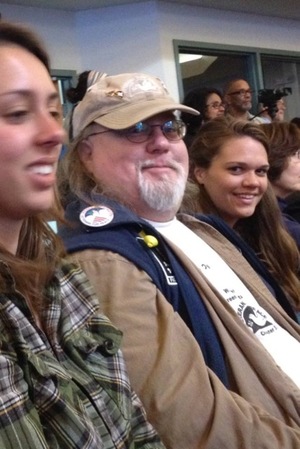 Here is the information about myself I wish to share...

Born in Chicago, Illinois at the Swedish Covenant Hospital which has since burned down. When i was a tyke my folks moved from the Rogers Park neighborhood in Chicago to Highland Park, (Ill) at the border of Cook and Lake Counties. They later moved to Libertyville, (Ill) where I graduated from LHS in 1973.

Libertyville was home to Adlai E. Stevenson and Marlon Brando's childhood home. In high school I grew to know Marlon rather well as he was my high school sweetheart's father's best friend.  After graduating LHS I waited a year to go to Warren Wilson College [WWC] outside of Asheville, North Carolina where I lasted until 1977 when I entered the U.S.Navy to be a cook.

From 1980 to 83 I was on shore duty at Portsmouth Naval Shipyard [P.N.S.] on Seavey Island in Kittery, Maine. This is a nuclear sub refueling center on the Piscataqua River directly across from Portsmouth, New Hampshire. Historically, this command was established under John Paul Jones' watch as a shipbuilding and rehab facility in our early history.

In the late 19th and early 20th centuries PNS also saw duty as a military prison command as a Navy and Marine stockade. The prison is built on the point of Seavey Island where the current flowing from the Piscataqua River entering the Atlantic Ocean is fast enough that no prisoner survived that swim which was essentially the only probable escape route.

From late 1983 until I left the Navy in 1988 I was in the VF (Fitron) 84, the Jolly Rogers or,  unofficially, the "Hollywood Squadron". That unofficial nickname came from the fact that the squadron and ship, the U.S.S. Nimitz (CVN-68), were the stars of the movie "The Final
Countdown". VF 84 flew the F-14 which was the fighter plane that replaced the F-4 after VietNam and it was also the plane that the movie "Top Gun" starring Tom Cruise was based around. Top Gun was released in 1986 and was about the mission of the dog fight school at NAS Miramar,
California whose nickname remains Top Gun.

When the Nimitz went into dry dock for rehab our CAG [Carrier Air Group] transferred to the U.S.S. Enterprise [CVN 72] at Norfolk [Virginia], which had just been commissioned at the time, to ride it around the Cape of Good Hope and up to it's new homeport at Bremeton, Washington.  Let me explain something. A carrier's designation (CVN) is this...C =carrier; V = air; and N = nuclear. Thus, CVN stands for Nuclear Aircraft Carrier, In 1988 I was not asked to return to the Navy and I tried to make a living in Virgina Beach which is difficult, in the least, with only a high school diploma. While I spent the time at WWC I never graduated from there. In the late fall of 1988 my family had a reunion in Colchester/Essex, [Vermont] which I came to. While here I got a job at International Cheese in Hinesburg which is now owned by Saputo, Ltd in Wisconsin. After working at several restaurants in Chittenden County Iended up graduating from CCV in Burlington ('95) and then from Johnson State College in 1999.

I became a member of Will Miller Green Mountain Veterans for Peace [WMGMVfP] in late 1992 or early 1993 and, under the informal tutelage of Will Miller and Dave Ross was able to give greater definition to why I joined and why I oppose war. During my tenure in the Navy, which was after the end of our action in VietNam and preceded going into Iraq, what I saw was a lot of waste of resources. That waste was at the destruction of the earth's environment which does not allow our ecology to function as it should.

Additionally, the waste and destruction of resources became a great issue to me. For example, when I first checked aboard the Independence in the middle of summer and when I did so there were six pallets of milk sitting on the hangar deck waiting to be stowed. Three days later these
same pallets were still there...starting to rot. Keep in mind this is in Norfolk (Va.) where the night time temps are in the 80's.

Eventually, this product had to be "deep sixed", or thrown in the ocean, when we got underway.
Another example was when the end of a fiscal period would come about squadrons were sending out "training missions" to deep six fuel cells.

These look like bombs under the wings of the airplanes and these cells are a cheap metal which contain jet fuel which is, essentially, kerosene. The reason for disposing of these fuel cells in this manner is so the command can receive that same fuel allocation in the same fiscal period the next year.

Last election cycle I asked General Rainville (Ret.) if this practice still exists in the military today and she confirmed that it does. As a junior officer General Rainville was a maintenance officer in aviation commands.

I think my continued work with WMGMVfP is a matter of record.