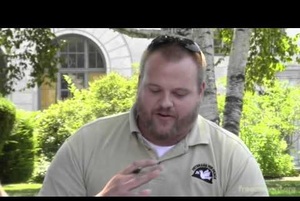 Will Hopkins: US Army Infantry, Iraq 2004-2005; Director, NH Peace Action
My friend Mac, arm hanging by a strand of muscle or sinew
Blood flowing by the pint, staining tan battle dress red-black
A woman who stepped in front of our humvee, having lost all to war
Brains spread across pavement
The smell of burning chemical, the smell of war
The feeling of rippling as a bullet tears open the air by my ear
Like a zipper opening unfathomably fast
When I am thanked for my “service” I cringe
I asked my stepdaughter Evelyn, then in kindergarten
What she wanted to be when she grew up, she said
“An animal rescuer, or a veteran.”
She would choose those images, and the guilt
I was a tool of evil men
A foreign invader killing men defending their homeland
For oil, territory, politics, whatever
I was a murderer-am a murderer
A killer
“An animal rescuer, or a veteran.”
I don’t want to be recognized, as the hero you are tasked to paint me
I don’t want to be recognized, as the monster I allowed myself to become
I want you to teach my children peace
That the men defending their homeland from me, were as real and human as me
And that their children, starving, barefoot, now parentless
Are as real as they are
As human as they are
As worthy of living safe from war,
and going to school,
and playing on the playground
That that woman who stepped out in front of our humvee was as real as you
As real as your student’s own mothers
I won’t be attending your ceremony
And I have a request, as a parent on this Veterans Day, as a veteran on this Armistice Day
Please, please, please
Teach my children peace.
In a couple of years, my other daughter Aurora will come through your doors
Let her tell me
“An animal rescuer, or a doctor.”
“An animal rescuer, or a teacher.”
“An animal rescuer, or a firewoman.”
“An animal rescuer, or anything.”
I am no hero, and the world has had enough war
If we can teach our children peace can the world not see its last veteran?
Thank you for your diligent hard work, for your caring and conscientious teaching of our children.  Thank you for getting up early and slogging in, so that our children can learn to read and to function in this world.  For working as long and as hard as you do for your arguably almost livable wages. You are heroes- I will teach my children that.
Category: Uncategorized
Tags: Armistice Day, Will Hopkins