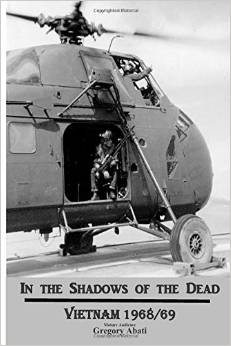 This is a true story of a young man’s journey through the Vietnam War.  It’s a story about the impulsive nature of youth, the corruptive forces of war and the loss of innocence. It’s a story of courage and honor, tragedy and brutality, self-sacrifice, compassion and heroism. It is a story about a war that most likely should have been avoided and one that deeply dived this nation. I was a 18/19 year old machine gunner in Golf Company, 2nd Battalion, 26th Marines.  We were fleet Marines stationed on the USS Okinawa spending the majority of our time in combat bogged down in the mud and blood of Vietnam.

The attachment is about three Marines in a shallow foxhole during one dark and bloody night in Vietnam.  This incident took place during operation Bold Mariner, January, 1969.

Category: Uncategorized
Tags: Veterans For Peace, VFP, In the Shadows of the Dead, Gregory Abati, book