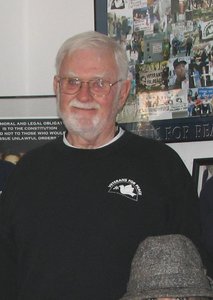 I was a late bloomer. My anti war activation didn't begin with my war, Korea, or even Vietnam ( though I deplored it), but with the coincidence of the first Gulf War and finding out about Veterans For Peace, in 1991. At that time, I  watched, with disgust, the sanitary, long range, killing of people on cathode ray tubes. No smell, no heat, no concussion, no screaming – just black and white blooms on a screen. Pretty chicken-shit, I thought.

Then I met Jim Gilbert, an Army vet interviewed for a column by local pundit and Vietnam vet, Bill McKlellan. I read about the start-up of a local chapter of VFP, here in St. Louis, and I wanted in.

Through Jim, I met an activist nun, Maggie Fisher, who was putting out a newsletter on Latin American Affairs. My education concerning the policies that led to the current war, the enduring wars of South and Central America, Vietnam and, now, in Iraq, had begun. First order of business – read Howard Zinn's “A Peoples History of the United States”. Next, Bruce Cumings “The Origins of the Korean War”. Reading that changed my myopic view of my war and caused me a lot of pain I later dealt with in return trips to that battlefield.

I attended my first VFP convention in 1996, in Columbia, Missouri. There I first met Charlie Atkins, then Treasurer for VFP and another Korea vet. He was a man of great generosity and heart. We became fast friends.

It was also the occasion of founder and Executive Director, Jerry Genesio's, resignation. The story of VFP's beginnings in Portland, Maine, the attraction of the concept of veterans of war working actively for peace, the vitality and power of the concept carried forward into actions in Central America and the shattered principalities of the old Yugoslavia are covered in his book, “Veterans for Peace, The First Decade”.

Jerry Genesio departed VFP after a bitter factional fight between those who believed education was our only proper mission and those who advocated humanitarian relief and other activist causes. Veterans For Peace was deeply wounded. I wrote about it later, at the behest of David Cline, in a work titled,  THE DEMOCRATIZATION OF VETERANS FOR PEACE. It carried the history of VFP from 1995 up to 2007.

When VFP was headquartered in Maine, Jerry Genesio ran VFP from his home, later from an office at the Government Center in Portland. His was a deeply personal mission that attracted many veterans, but eventually began to alienate members as the pyramidal command structure began to chafe and disrupt.

I believe what happened is reflective of the nature of the kind of people who are inclined to join and support VFP. We are not sheep. We may have been at one time in our lives, but when we arrived at the point of deciding to join VFP our experiences had transformed us into independent thinkers and actors.

We had developed an appreciation for critical thinking and no longer accepted glib explanations from our national leadership. We demanded honesty and transparency. We had passions rooted in the angst of our wartime and military experiences. It became evident that one of the greatest challenges for the members of VFP is allowing for diversity while maintaining sufficient focus to turn a culture away from militarism and toward peace. VFP's defining characteristic is it's eclecticism, that is both a source of strength and frustration to the leadership.

I retired from my hazardous materials management consultancy in 1998, ready to do something meaningful in the interests of peace.

In 1998, I went with Global Exchange to Chiapas, Mexico to look into the massacre of a group of indigenous called The Abeyas, (the Bees) There I met Frank Houde, Vietnam Helicopter pilot and VFP member and his wife Connie. We were able to put the lie to the claim that the Mexican military was not using US-provided helicopters in their operations against the indigenous population.

Next was Colombia, in 2000, where, with a delegation from the Columbia Support Network, I visited with local activists, peasants and generals, clergy and ambassadors, looking into the relationships between paramilitary groups, the Colombian military and ours, in the displacement of thousands of people from their farms and villages.

Also in 2000, I went back to Korea for the first time, with Charley Atkins. It was not the same place I left in 1954. Modern cities and trees! The American Friends Service Committee put me in touch with Serepina Cha, (her underground name), who took me to a massacre site near Pusan in south Korea. I had the opportunity to apologize to the sole survivor, an old lady now, who tended the shrine where the slaughter occurred. Eighty-seven civilians died at the hands of panicked GI's, under a white neutrality flag.

My second visit, 2001, was to more massacre sites. We interviewed survivors and, later, reported to a tribunal held at Riverside Church in New York City run by Atty. Gen'l. Ramsey Clark.

My last trip to Korea as after I left my post as ED, in 2005, with Charlie Atkins. We were part of  VFP delegation in support of the farmers of Pyong Yang, whose farms were, once again, being taken over by our military base.

On each occasion, I put together slide shows and talks, trying to carry the message of peace to as many people who would listen.

As for me, each trip deepened my understanding of global politics and my appreciation for the resilience of the human spirit. In a way, it was like going back to my time in Korea, but with a lot more education under my belt. I would never again be the naive youngster going along with the propaganda.

Charlie Atkins prevailed upon me to run and I was elected to the Board of directors in 2000. At the 2001 Albuquerque convention, I proposed to leave the Board to  run an office that had  had but scant attention for some time. The phone was not being answered, e-mails left to accumulate, dues notices not sent. I asked that it be located in St. Louis. The members voted “yes”, and the office arrived on September 11, 2001, brought by Lee Vander Laan, Vietnam veteran and computer wizard, in a Ryder Rental truck. What I had proposed as a part-time job immediately blossomed into full time and over time.

It began with a full-page ad in the New York Times, funded by a Japanese peace group, that consisted entirely of a letter to President George Bush by ex-Marine Greg Nees advising him not to go off the deep end and start a war over the event. That caught the attention of Bill O'Reilly of cable talk fame, and I found myself on national TV defending Veterans For Peace. I came away sweating, but convinced that we were the right people to stand up for peace when O'Reilly deferred to me because I was a veteran.

The phones began to ring. E-mails poured in. We began the process of inviting lapsed members back into the fold and recruiting new ones with our burgeoning campaigns against war cropping up allover the country. I had to hire help. I recruited a cadre of Associate Members who made it possible to get out mass mailings. The tempo was fierce. It was a time of great excitement as masses congregated in DC and elsewhere. We were invited to join other peace organizations and United For Peace and Justice was the eventual outcome. We were in on the early organization work, and it was intense.

Along the way, I came to know a great many wonderful people who stepped up to move VFP forward.

Phil Butler, Navy pilot, Vietnam POW for eight years; a powerful leader who inspired us to always do more and who ran our conventions with a firm and fair hand.

Peter Shaw, Marine, Korea, a quiet man who served on the board, labored over the newsletters and gave wise counsel.

VFP President, Sandy Kelson, Army, Vietnam era, a master educator and leader. An unredeemed iconoclast with a tenacious way of boring into the truth of matters.

Lincoln Grahlfs, Merchant Marine, WWII, as gruff as his name, who also served as treasurer and provided me with invaluable guidance after the move to St. Louis in 2001.

Jozef Hand-Boniakowski, who for years kept up our website.

Ellen Barfield, tireless champion for justice and peace and an inspiring person in her own right

There are so many more I came to know and love. I cannot name them all here, but I owe them all so much.

Most prominent amongst them was David Cline, who became president in 2002, was re-elected and served us brilliantly until his death in 2007. He was elected by the board shortly after we moved the office from DC to St. Louis. It was the beginning of a remarkably fruitful relationship. Right away David mobilized the older Vietnam Veterans Against the War and brought them into the VFP fold.

His long experience at organizing union members and veterans, coupled with my willingness to take direction and provide the institutional backup in the new office in St. Louis, we made an effective team. We were on the phone with each other almost every day. Once, David called just to tell me he thought of us as a “dynamic duo”. His charisma was such that I was inordinately pleased that he thought so.

-- and a strategy would appear

of this remarkable man

to accept an injustice

of how to confront it.

-- words that would have raised my hackles

if I hadn’t respected

that characterized, more than anything,

if I hadn’t respected

the humanity of suffering shared

that drove him to labor

in this difficult vineyard

where the most abundant crop

challenging us all to think;

to really know our minds

before forging a message for the masses.

-- and the clouds of doubt would part,

actions would form and

our struggles would be elevated

to new heights of significance.

the misfits the military couldn’t tame

the malcontents, if you will,

unwilling to listen to lies

and empty promises of glory

He led us well,

with heart, with humor,

with wit and wisdom

and, most all, with a keen awareness

of the faults we all live to overcome.

In 2005 I left the office of Executive Director in the very capable hands of Michael McPhearson, who runs it to this day.

I was taking my first vacation, when hurricane Katrina hit and David Cline dispatched me to look into the rescue and supply operations being initiated by a number of our members. Another story for another time.

I now work as a Veterans Drug Court Mentor and Executive Director of the Veterans Court Technology Clinic.

The years with Veterans For Peace have been a deep and rich experience; the most significant of my life.  They taught me a great deal about humanity, as David and I herded this raucously diverse bunch of military cats. I have learned much about accepting differing motives and opinions, persisting in the good fight, and, I hope, something about humility. I am proud to count myself a Veteran For Peace.