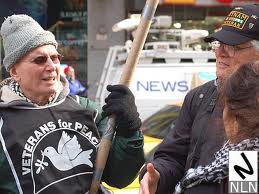 This speech was delivered by Bill Gilson, President of NYC Chapter 34, to Peace Action of Staten Island and The Humanist Society of New York in 2014.

It was the night before Christmas. The year was 1914. World War One had begun 5 months earlier. A bitter cold had seeped in during the day. Rain had mercifully stopped. 1914 was to be one of the most severe winters to occur in northern France. The assassination of the heir of the Austro-Hungarian Empire, Franz Josef Ferdinand, and his wife on July 28 of that year had put in motion a spiral of events that would launch the first World War.

Existing treaties compelled some nations to enter the war, while others entered into the fray for self-serving reasons. In the end, Germany, Austria, France, Great Britain, Russia, Japan, Bulgaria, Greece, Portugal, Rumania, Serbia, Italy, Turkey, Belgium, Australia, Canada, China and later the U.S. would become part of the carnage in the “war to end all wars.”

Far from the early days of enthusiasm for going to war “for God and Country,” the stark reality that confronted the British, French ,Belgian and German young men on the Western Front was extremely grim. The western front ran almost 400 miles across northern France and Belgium. Germany overran Belgium and marched toward Paris. They were stopped at the Battle of the Marne. From then on, the war was reduced to fighting from trenches without either side making any forward advance. It would remain that way for most of the next four years.

Soldiers dug in for a long series of stalemates punctuated by deadly, futile charges in which men were cut down by never-ending fire from machine guns, repeating rifles, relentless artillery shelling and mortars. To make life even more unbearable, trenches were prone to fill to the knees in some places with freezing water and mud. Bodies lay for days if not weeks entrapped in "No Man's Land" — the killing field between opposing trenches, or entangled on barbed wire until it was safe to retrieve them during a lull in battle.The sight and stench of fallen comrades left in the trench, unburied, was also disturbing. Warding off the company of lice, fleas and rats was an ongoing battle in the trenches.

The new Pope, Benedict XV (15th) , made a universal appeal for a Christmas Truce that was ignored by the belligerent parties, though surely noted by the frontline troops.

Christmas packages were delivered to the British troops as a gift from King George V and Princess Mary containing chocolates and a picture of the King. Likewise, the Germans received similar packages from Kaiser Wilhelm II with a meerschaum pipe and a bottle of schnapps. The Kaiser also sent 100,000 Christmas trees with candles. So Christmas was very much on the minds of the soldiers on the western front in the winter of 1914.

The New Year offered an opportunity to quickly end the madness of war and achieve victory — a desire shared by troops on both sides to get home and begin a normal life once again. Set against this horrific background of suffering and misery on both sides arose the strains of "Silent Night" from the German trenches, that were only 30 to 70 yards apart in some places. Next appeared Christmas trees with lighted candles placed at the top of the trenches. Signs appeared in simple English: "You no shoot, we no shoot."

Imagine the shock to the British at this sight. Before too long, the singing of Christmas carols sprang from the British side. Slowly and cautiously, men began to leave the trenches from both sides. They made their way into No Man's Land. After emotional greetings, Germans and British buried the dead, sometimes working together. When this task ended, more singing, hand shaking and exchange of gifts, sausage, schnapps, cigarettes, chocolates cemented the camaraderie along with exchange of addresses and promises to meet after all this was over.

The next day, Christmas, was cold and frosty. The fraternization of the troops began anew and lasted throughout the day with improvised soccer games, more kicking a makeshift ball around than an actual game. Although there was one report of a game between German and British troops, with the Germans winning 3 to 2. In some sections of the line, the truce lasted into midnight. In others, it depended on the location of troops on the 27 mile British sector of the line. Still in other places, it lasted until New Years Day.

Many reports of the event were circulated in newspapers in Britain, fewer in Germany, through letters sent home richly describing the events. For staging this celebration, troops from both sides were rotated and replaced with fresh troops who had not experienced the Truce. None were disciplined. For those who participated in the Christmas Truce, it became a life-changing moment that they would never forget. At the conclusion of World War One, on the eleventh hour of the eleventh month in the year 1918, four empires had been dissolved: the Russian, German, Austro-Hungarian and Ottoman. Fifty-nine million men had been mobilized and over thirty seven million people had been killed or wounded. Eight million military lay dead.

The devastation across Europe was enormous. An entire generation of men had been wiped out. Much of the landscape and buildings lay in ruin by artillery shelling and bombing. People were starving from shortages of food and the disruption of trade. The mobilization for war had taken away millions of men from the agriculture labor force, thus cutting food production.

Because this year is the 100th anniversary of the Christmas Truce, we in the peace movement can take this opportunity to pause and renew our commitment to making a better world through peace, at a time when the United States is embarked on a policy of perpetual war. It is not too late to stop an endless war in Iraq and Syria. We have spent over $1.1 billion in Iraq and Syria since August of this year, yet Congress has not debated or authorized our latest war. It will take grassroots pressure to move Congress. A coalition of organizations has called for National Days of Action, starting Tuesday Armistice/Veterans Day through Sunday Nov 16th.

The real message of the Christmas Truce is that with human empathy we can reach across trenches of indifference and honor each others humanity.

In the words of Dr. King: "peace is not the absence of war, but the presence of justice." The bigger question I believe is what would that justice look like ?

In keeping with this question, the Veterans for Peace national board recognizes that the violence of war has been epidemic in this country since its founding. We acknowledge the 500 year war on the indigenous peoples, the ongoing war and racism against black and brown communities, the long history of racist immigration policies, the economic war against the poor of all colors, the war against Muslims right here in the United States since 9/11 and unending violence against women.

We see a connection between violence and police militarization here in the United States and in U.S wars abroad. With this in mind, "Justice at Home, Justice Abroad" is the new slogan of VFP. It is also a reminder to the peace community that the peace and justice we seek has to start with us in our very own communities, involving ourselves in the struggles of the
Other. We all share the same address: Planet Earth - there is no "Planet B.".

VFP has engaged with community groups in St. Louis where our national office is located. It was on the ground in Ferguson, eight miles away, after Michael Brown was killed, offering assistance where needed. These are some of the ways "Peace With Justice" works. It starts with us, the organized peace community, engaging with Muslim communities and communities of color that confront police violence, stop and frisk, unjust sentencing, solitary confinement, and the lucrative private prison system. The organized peace community would be strengthened by engaging with Climate Justice organizations as well. We must stop the war on Mother Earth, the perpetual war on the world and the War on our people here at home.

I invite you all to celebrate the 100th Anniversary of the Christmas Truce on Saturday evening, Dec. 20th, at the Great Hall of Cooper Union. Folksinger John McCutcheon will perform a concert that includes his song "Christmas in the Trenches." Tickets are available on the Brown Paper Tickets website for $35, or $25 for those with very limited income.