Elliott was found guilty and sentenced for protesting against drone warfare at Hancock Air Force Base near Syracuse, New York. 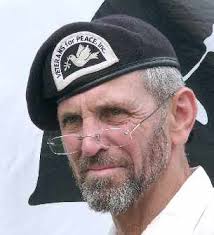 As our government puts me behind bars I feel I am able to offer one small voice for those who are screaming voicelessly under the war crimes of our government. Note I say our government for if it is not ours or we don't make it ours, than we are as complicit as the so called “Good Germans” were who allowed the Nazis to convert their country to despotism.

As I follow my codefendants to jail I ask everyone, don't think about me, remember the innocent children dieing from our drones. Remember their mothers and fathers, their siblings and friends - so many people paying such a high price because we, the US citizens, are afraid to make our government do the right thing. When you object to living in a surveillance state imagine living under drones where because of a few seconds of inattentiveness or bad judgment half way around the and your community will to be smoked.

No one can give anyone a democracy - if they give it they can take it away. If they can take it away, it is not a democracy because they always will take it. Fredric Douglas summed up the entire political process in one sentence when he said “Find out just what any people will quietly submit to and you have the exact measure of the injustice and wrong which will be imposed on them.”

After WWII with first the Nuremberg Tribunals and then the Tokyo Tribunals we established the principle that citizens who do not resist the war crimes of their government are complicit and punishable. This is a powerful concept for it denies criminal regimes the support they need to do their dastardly deeds.

When I am asked by people “but what can I do?” I ask them, can you sit there and do nothing while this is being done in your name? Can you justify doing nothing just because you don't know of something you know will work? No as Peter Benenson so clearly said, “it is better to light one candle than to curse the darkness.

Here are some thoughts of things you can do: