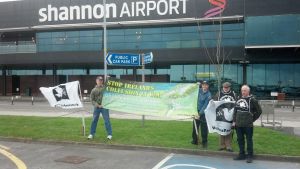 Almost fifteen years have passed since the ink had dried on the pages of the Good Friday peace accords, when saner minds actually prevailed to endThe Troubles. The Celtic Tiger was restless then, but nonetheless it could have hardly been argued that if peace was a place, it was here, in Ireland.

Since then the world lost its way. In spite of grass so green it’s said you can see the blue, and red deer, spring lambs and border collies still setting the pace in the meadows of County Clare, there can be no doubt that the bloodied, ragged edges of empire had spread like a cancer, enveloping even the proud heritage of Irish neutrality.

This month marks ten years since the start of the illegal war and occupation in Iraq, but more notably the beginning of Irish complicity in the inevitable bloodshed by cowed politicians allowing Irish airspace to be used to transport US troops and munitions, ultimately selling out their constitution by disavowing its "devotion to the ideals of peace... adherence to the pacific settlement of international disputes...and the recognised principles of international law" all for the sake of war-profiteering.

On March 20, 2003, the day after the US invasion of Iraq, continuing through the US-led war and occupation in Afghanistan, over 2 million armed US troops have been allowed to transit through Shannon Airport on their way to the United States’ illegal wars of choice in the Middle East and Asia. To make it worse, a blind eye was turned by the Irish lower House, Dail Eirann, to the transportation of munitions cargoes, including depleted uranium, as well as suspected rendition flights, in total disregard of calls for inspection of these aircraft.

This year Veterans For Peace decided to get actively involved by supporting the efforts of the Irish anti-war activists of Shannon Watch, the Peace and Neutrality Alliance, and the Irish Anti-War Movement, to end the US military invasion of Shannon. On March 10, US Veterans For Peace members Barry Ladendorf from San Diego, California, and Gene Marx from Bellingham, Washington, joined forces with Irish VFP recruits and organizers, Ed Horgan, Tim Hourigan, John Lannon, and Dolan Roche, along with VFP London's Ben Griffin, to stand united with Shannon Watch.

In spite of attempts by dozens of airport police and Ireland's National police An Garda to intimidate the visiting VFP delegates on the airport confines with credential checks and vehicle tails, the new Shannon Watch allies from VFP successfully joined the ranks of our cold and wet, yet enthusiastic Irish hosts at the airport perimeter for a two-long demonstration. A non-stop chorus of car honking, with waves of peace signs from supporters and commuters, saw the new coalition out to a successful conclusion.

VFP Membership Committee members Marx and Ladendorf were invited to speak at the University of Limerick the following day before returning home.

While the numbers of anti-war activists have declined in Ireland since Shannon’s peace camp days and direct actions of the Pit Stop Ploughshares, current Irish core-groups and activists are no less deterred by Obama militarists than they were with the Bush cabal and more dogged than ever in their determination to restore Irish neutrality and end the US occupation of Shannon Airport.