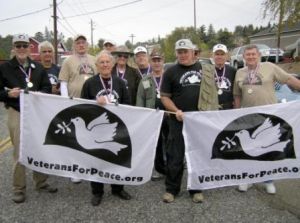 VETERANS FOR PEACE is presenting a panel discussion on Sunday, March 10 at the Veterans Memorial Building in Placerville. Courtesy photo

“We’ll talk about how we get into wars, the cost of war, how the U.S. military will fight the next war, and what folks can do to stop war,” said Carroll Nast, president of Chapter 122, convener of the panel. Questions and comments from the audience are welcome.

This free event takes place at the Veterans Memorial Hall, 130 Placerville Drive in Placerville, from 1 to 3 p.m.

The topics panel members will address are wide-ranging and include the historic pattern of U.S. imperialism and the plan — as proposed by the think-tank Project for the New American Century (PNAC) — to establish a global American empire on land and sea, in air, space and cyberspace.

Topics will also include the reasons for going to war in Afghanistan and Iraq, the case of Bradley Manning, drone warfare, current machinations in Syria, Iran, the Pacific and Africa.

The panel consists of local vets living in the Colfax and Sacramento area.

Carroll Nast was drafted in 1969 and honorably discharged as captain from the USAF in 1979. He served as a para-rescue medical technician, navigated air-refueling tankers and did combat support in Vietnam. He is semi-retired and leads hikes for the Sierra Club and drives a shuttle bus for his fellow vet, Dan Buckley.

John Reiger, a pottery-maker and current president of Chapter 87, served in the Army’s security agency as a teletype intercept operator.

“Like so many others,” Reiger said, “I became disillusioned with our foreign policies during the Vietnam War and have been an anti-war activist ever since.”

Barry Binks enlisted in the Army in 1964, working in civil affairs verifying collateral damage. Now a retired teacher of political science, he is an active war-protester.

Veterans For Peace is an official non-governmental organization represented at the United Nations. Its goals are to increase awareness of the costs of war, to restrain government from interfering in the internal affairs of other nations, to end the arms race, to seek justice for veterans and victims of war, and to abolish war as an instrument of national policy.

Nationally, the VFP conducts a number of projects. The Iraq Water Project, ongoing since 1999, has installed 60 water purification units in schools, hospitals, and other institutions serving the people of Iraq.

The Arlington West Memorials Project set up thousands of crosses around the country in parks, along roadways and other public spaces.

The Agent Orange Recovery Project, in cooperation with Vietnamese Americans, asks government to fulfill its moral and legal responsibility to compensate all victims of Agent Orange dispersed in Vietnam.

“Imperialism and Current Military Exploits” is one of a series of events being held during Placerville’s Season for Nonviolence.

For a calendar of events go to edpjc.org.