There are very few things that can bring immediately to mind the sacrifice of our military. One of those is Arlington National Cemetery.

For this Memorial Day weekend, a group of Veterans For Peace members and volunteers created that sacred place in Tacoma, Washington. This is the 6th annual Arlington Northwest Memorial Display. Thousands of symbolic grave markers, along with thousands of American flags, were placed at Marine Park in Tacoma. Organizers say the purpose is to honor the military and remind everyone about the human costs of the wars in Afghanistan and Iraq.

"It's just to make a graphical, visual representation of how great that loss is," said David Dittemore, Navy veteran and Vice President, Tacoma chapter of Veterans for Peace. Dittemore said the display is not political. "We don't put up the peace sign, we don't put up the signs we hold along the road about the war, or whether it's right or wrong, this is all about the sacrifice of our troops," he said. 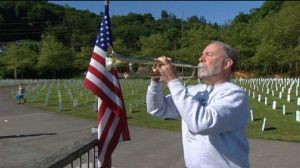 “Memorial Day can just be seen as a weekend for barbecues, and it’s not a weekend just for barbecues,” said volunteer Sally Shawl. “A lot of people died in wars and this exhibit, with names and ages, where people are from and how they died reminds people about the sacrifices the military has made.” This year the memorial also included recognition of civilian deaths in the wars in Iraq and Afghanistan.