New rules have been issued that will eliminate the right to protest as we know it in Washington, D.C. but the government is required to consider public comments before it can make the rules final. You only have until Monday, October 15th to submit your statement of opposition.

Veterans For Peace is working with the Partnership For Civil Justice Fund (PCJF) to make sure our opposition to these rule changes is heard loud and clear.  We are developing a statement to send to the National Park Service (NPS). Our official organizational statement will help give VFP standing if there is a lawsuit to halt the changes.

If you oppose these rules, take action right now. Follow this link to the NPS comment page to voice your opposition.  Your statement of opposition will be part of the public record of comments that must be considered before changes can be made. You can make comments via PCJF platform or directly on the NPS comment page. 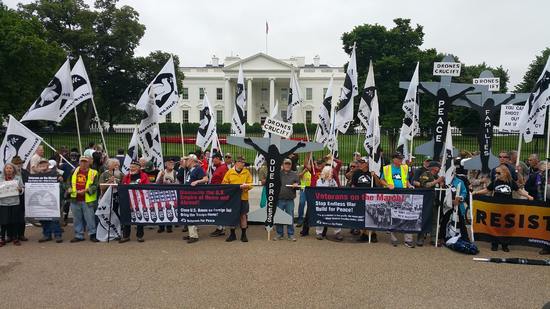 The new rules proposed by Secretary of Interior Ryan Zinke will directly impact the work of Veterans For Peace and all movements for peace and justice. They are anti-democratic and undermine the 1st Amendment.

The rules will impose steep fees and costs on demonstrations in Washington, D.C. They effectively ban protests on the White House sidewalks and force protesters to pay the costs of barricades erected at police discretion, park ranger wages and overtime, and for harm to grass from standing on it. The rules create waiting periods removing any obligation of the government to promptly process or approve permits and restrict and suppress spontaneous demonstrations that respond to breaking events. That is just the beginning.

Take Action Right Now To Stop Trump's Plan to Crush Protests. Don't delay - you must submit your comment by October 15.

Learn more about the rule changes:

Below is a sample comment. Please customize in your own words.  Let NPS know how these changes will hurt you, the groups/issues that matter to you, and democracy overall. Follow this link to post to National Park Service (NPS) comment page.

I am opposed to these new rules that act to restrict and burden the ability to demonstrate in our nation's capital. As a veteran I was told that I served to preserve and protect the U.S. Constitution. These rule changes infringe on our First Amendment rights to assemble in our public parks, sidewalks and streets to engage in debate and to protest policies and actions of our government. These rights are central to democracy and should not be further restricted.

The NPS has put out a dense regulatory document that fails to provide explanation or justification as to why these proposals are necessary.

Many of these proposals lack enough detail or explanation to fully understand how they will work in practice and give too much discretion to government officials.

I am also opposed to the plan to close most of the White House sidewalk which will effectively shut down protest assemblies.

This is an offense to my time in the U.S. military and the values I am told my nation stands for.