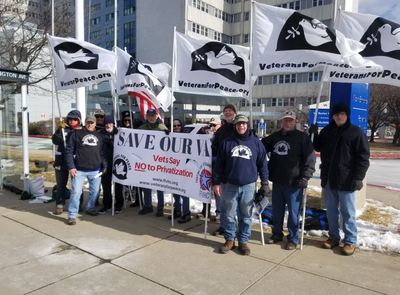 On July 24th, Reps. Mark Takano (D-Calif.), Mark Pocan (D-Wisc.), and Raúl M. Grijalva (D-Ariz.) introduced an anti-privatization resolution expressing support for policies that maintain a robust, fully-funded and staffed Veterans Health Administration of the Department of Veterans Affairs (VA) that does not jeopardize care for veterans by moving essential resources to the private sector.

Under the Veterans Choice program, the VA is being rapidly privatized. At this time more than 40% of all veterans outpatient appointments are being conducted in private sector healthcare facilities and only 60% of that work is being conducted at the VA.

Mr. Trump and the Koch bros. appointees now running the VA, will soon have half of more of the VA work being pushed into the private sector. Their long term effort is to close down the VA nationwide and sell off facilities to developers

This is being done under the guise of helping veterans but these powerful men intend to make billions of dollars in profits off of sick veterans and selling VA facilities. Private care costs 30% more than VA care.

"More than 9 million veterans depend on the VA to receive the health care services they need. However, these services are being sabotaged by Republicans and special interest groups who are focused on forcing veterans into the for-profit health care system," said Rep. Mark Takano. "The recent confirmation of Robert Wilkie as VA Secretary has given Congress a new opportunity to make our position against privatization clear. While the Trump Administration seeks to undermine the VA, we must continue advocating for a well-funded and properly staffed VA that will provide our country's veterans with the quality services they deserve."

"Veterans deserve a strong health care system that understands their experiences and is adequately equipped to address their unique health challenges. We have seen the failures of a system that puts a middle man between individuals and their care, and the shady movement to privatize veterans care would do just that," said Rep. Raúl M. Grijalva. "Trump administration officials and others who seek to profit off veterans by raising costs and lowering the quality of care are shameful. Instead of auctioning off their health care to the highest bidder, we must provide full funding, staffing, and support structures that protect the VHA so that it can provide veterans the tailored care they want and deserve."

According to a bipartisan survey by Lake Research and Chesapeake Beach Consulting, 80 percent of veterans oppose turning health care provided by the Department of Veterans Affairs into a system of private sector vouchers that may not adequately cover costs.

Tens of millions of dollars are being spent by organizations seeking to dismantle the Department of Veterans Affairs and to outsource veteran care into the private sector. With the support of these groups, Congressional Republicans and the Trump Administration are throwing billions of dollars into the failed Choice program. These billions are being diverted to private care instead of investing those billions in additional staffing at VA hospitals.

The VA has 35,000 vacancies mostly doctors and nurses. Yet Trump refuses to raise doctors salaries to make them comparable to the private sector.

Rep. Takano's resolution makes clear that the U.S. House of Representatives should supports policies that provide necessary resources to serve veterans by maintaining a robust Veterans Health Administration and opposes policies that seek to undermine and privatize the VA.

Take action by sending a note to YOUR CONGRESSIONAL REPRESENTATIVE and ask them to Co-Sponsor the bill!  (Feel free to include the attached letter)

Feel free to include your own note with the request!

P.S. Do you want to join Veterans For Peace “Save Our VA” Action Groups?