The Desert National Wildlife Refuge (DNWR) is located next to the Nevada Test and Training Range. The United States Air Force is attempting to take over and reduce access to over a million acres of the Refuge for bombing and combat training. The DNWR is a protected refuge that includes hundreds of species and our natural and cultural heritage.

The Air Force currently already controls 2.9 million acres for the Nevada Test and Training Range, a sprawling expanse of public land that has been withdrawn for military use. These lands provide ample opportunity for aerial gunnery, flight testing, and other military readiness activities. With so much public land already available to the Air Force, there is no need for the dramatic expansion into and destruction of the Desert National Wildlife Refuge.

The military has designs to use the expansion for a multitude of unlimited war training that will include wheeled and tracked vehicle operations and direct bombing ranges. This sort of activity will damage this pristine environment forever.

As veterans we know the futility of war and that the U.S. military is engaged in too many conflicts that have nothing to do with our 'defense". Furthermore, with over 800 bases and installations at home and across the globe, the U.S. military is not lacking ample space for training.

Right now the National Desert Wildlife Refuge is shared and protected by environmental groups, tribes, individuals and government entities, including the military. There is no justifiable reason that the military must be solely able to access this land. With more than half our tax money already going to the 'defense' budget, expecting U.S. residents to also hand over our dwindling public lands is nothing short of a greedy land grab.

Congress must not sacrifice any more of the Desert National Wildlife Refuge for military use! 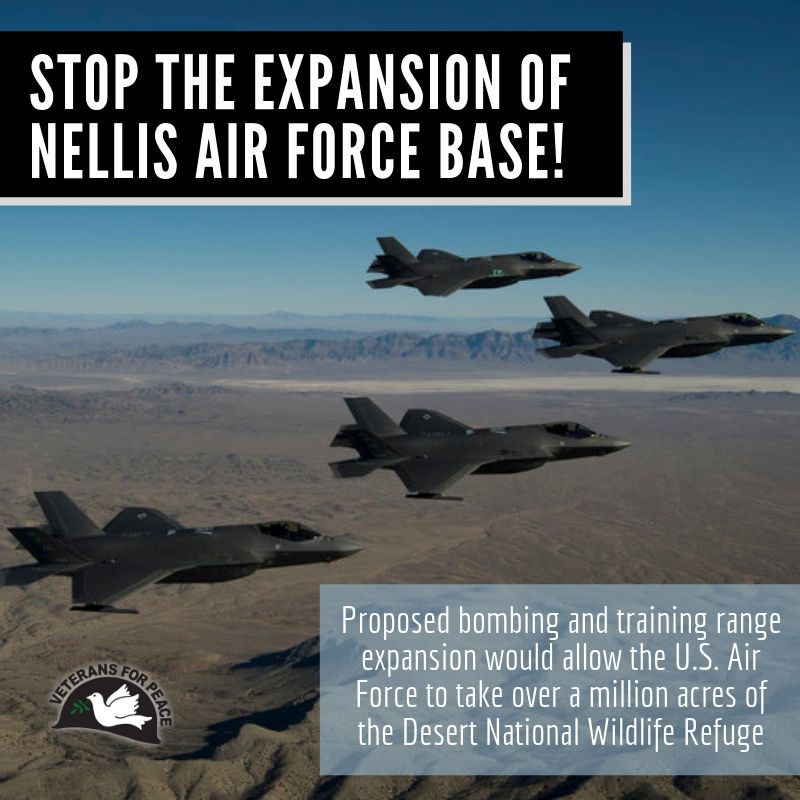