Veterans For Peace and the Veterans Challenge Islamophobia campaign are proud to endorse the #NoMuslimBanEver campaign.

Veterans For Peace and the Veterans Challenge Islamophobia campaign are appalled by the Supreme Court’s decision to uphold the Trump Administration’s bigoted and xenophobic #MuslimBan. As veterans, we fought to uphold the ideals in the Constitution - protecting the constitutional right to religious freedom means protecting ALL religions.

We believe in the tenets of religious tolerance and diversity and believe that the decision to allow this unjust and discriminatory Muslim Ban to remain will escalate an already disturbing precedent and open the door to even more blatant discrimination against people based on their race, religion, ethnicity or country of origin.

After this decision it is crucial that we have a visible, strong presence across the country standing in support of all those who are impacted by the Trump administration’s xenophobic, Islamophobic, and white nationalist agenda.

As veterans, we will continue to stand against hate.

We will continue to #SpeakOut and declare #NoMuslimBanEver 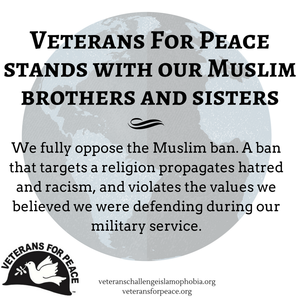