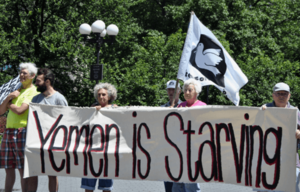 Yemen is facing a massive humanitarian catastrophe and we need your help to stop it. American aid is crucial to the Saudi war effort, and removing our assistance would limit Saudi attacks and maybe even push them to the negotiating table.

Email your lawmakers now and tell them to support the War Powers Resolution to end US support for the Saudi-led war in Yemen.

Check out this great Fact Sheet from Indivisible

P.S. From About Face: Veterans Against the War: Veterans are sharing videos statements telling congress #YemenCantWait”- please share and use to the hashtag to raise awareness and build public pressure.

5   Senator Chris Murphy (D-Conn): ”Trump may be helping to create a famine in Yemen. Congress could stop him.” The Washington Post, 5/19/17