Rescind the Medals of Honor for the Wounded Knee Massacre

Veterans For Peace believes that the federal holiday commemorating the arrival of Christopher Columbus to the “New World” is an affront to Indigenous peoples everywhere and particularly to native peoples of the Americas. We denounce the celebration of a person who carried out mass killings and genocidal acts against Indigenous peoples and paved the way for European colonization of native lands and enslavement of native peoples.

We recognize that the annual observance of Columbus Day here at home and our continued wars and occupations abroad are rooted in racism, xenophobia and militarism. Our mission of Peace at Home, Peace Abroad includes the commitment to seek justice for all victims of violence and war. Accordingly, we urge our government to no longer honor a person who committed atrocities.

Veterans For Peace understands that the struggle for Indigenous rights cannot be decoupled from other movements for equality and justice. We believe that violence and injustice must be challenged and ended in all its forms and that human dignity must be protected and defended. The Columbus Day holiday is a symbol of oppression and a violation of this dignity.

Movements for Indigenous rights and sovereignty are ongoing across the world – from struggles to protect water and sacred land in places such as Latin America, the Caribbean, Mexico, and India to here at home as Indigenous communities across the country continue their long fight for justice on the front lines of the struggle for climate justice, to Standing Rock to Mauna Kea to L’Eau Est La Vie resistance camp in Louisiana. 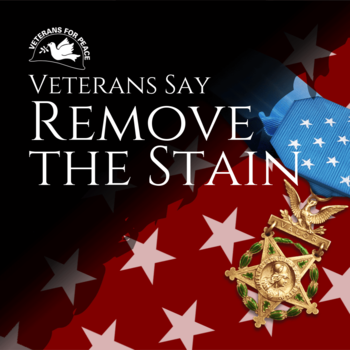 Veterans For Peace acknowledges the United Nations Declaration on the Rights of Indigenous Peoples, which “establishes a universal framework of minimum standards for the survival, dignity, well-being and rights of the world's indigenous peoples.” The United States was one of only four nations to vote against the Declaration in 2007 when it was adopted. However, in 2010, the United States changed course and announced its support for the Declaration.

The Columbus Day holiday is one barrier to the healing of the deep wounds of this nation’s violent founding and colonization and to the recognition and protection of Indigenous rights. We, therefore, call on the federal government to join the more than two dozen U.S. cities, including Phoenix, Denver, Seattle and Minneapolis, and the states of South Dakota and Vermont, in replacing Columbus Day with Indigenous Peoples’ Day.

Veterans For Peace also invites you to sign our petition in support of the Remove the Stain Act (H.R. 3467). The bipartisan bill, introduced on June 25, would rescind 20 Medals of Honor that were awarded to members of the Seventh Cavalry Regiment for acts committed during the Wounded Knee Massacre of 1890. We know that if enacted into law, the Remove the Stain Act will not erase this horrific slaughter of Sioux men, women and children. We believe, however, that by rescinding the Wounded Knee medals, the people of the United States will begin to take responsibility for our tragic history of genocide against the original peoples of North America. Sign the petition!