Ever since the Iranian revolution of 1979, the United States and its allies in Europe and the Middle East have used every opportunity to stop and reverse the revolutionary process in Iran and bring that country back under Western control. The current threats of war and expansion of economic sanction are nothing but a continuation of the same decades-old policy of undoing the revolution by means of forcing a regime change in Iran.

At the same time, the Iranian government’s policy of repressing any form of internal opposition, tampering with the elections, banning independent labor unions, political parties and mass organizations, and mass arrests of political activists has made the Iranian situation very complicated. On the one hand, the peace and justice movement in the United States and around the world sees its principled responsibility to oppose any form of aggression — be it military, economic or otherwise — against Iran; and, on the other hand, it must be mindful of not allowing its opposition to aggression be construed as a support for, or acquiescence toward, the Iranian government’s repressive policies.

This requires a well-informed and well-thought-out approach to the Iranian situation. It requires a great deal of informed discussion, extensive educational work, and a clearly defined approach that takes into account both sides of this complex situation; an approach that is based on both opposition to aggression and interference in the internal affairs of other countries and international solidarity with the peoples of other countries, not their governments.

To facilitate this process, the VFP Working Group on Iran aims at carrying out the following activities:

We invite all of you to join us in this important and necessary effort. 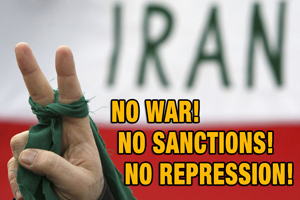 Visit our external site for recent updates to the crisis in Iran!