The mission of the GI Resistance Working Group is to provide timely information to VFP members about how they can support GIs who resist wars they believe to be illegal and immoral, or who take a stand against physical, psychological and sexual abuse within the military.

Veterans For Peace will support military personnel who refuse to deploy to illegal U.S. wars and occupations, who refuse to carry out war crimes, who seek status as Conscientious Objectors, or who, for reasons of conscience, choose to absent themselves from military service.

We will support GIs who exercise their human and civil rights, including their right to freedom of speech.

We will support GIs who seek adequate medical and mental healthcare, and all the benefits promised them by the military.

Veterans For Peace will reach out to GIs with information about their rights and responsibilities under international law and U.S. law, including the Uniform Code of Military Justice.
We will help GIs gain the resources necessary to defend their rights within the military, and we will help them find sanctuary if they are compelled to leave military control.

The GI Resistance Working Group will coordinate with other veterans groups and war resister advocacy groups in campaigns to support GI resisters, and we will initiate campaigns on behalf of Veterans For Peace.

We will encourage VFP chapters and members to participate in these campaigns by publicizing them, by taking political action, and by raising funds to help GI resisters with legal defense and survival needs.

Veterans For Peace will seek to create a positive image of GI resisters, and to influence public opinion in favor of these courageous men and women.

We have some ideas for initial campaigns for the GI Resistance Working Group which we we wish to discuss with the entire working group. We want to establish a democratic process, one that allows us to move forward decisively in the near future.

Our ideas include the following:

1. Campaign to support GI Resisters in Canada. At least two hundred GI resisters are estimated to be in Canada at this time. Many of them are Iraq War veterans who sought sanctuary in Canada after being ordered to re-deploy to Iraq. The Refugee Board in Canada has so far refused to grant refugee status to any of them, and, despite majority support among Canadians and even in the Parliament, the Conservative government has deported several war resisters and is pushing to deport others.
A strong statement – and action - from veterans in the U.S. against deporting war resisters could have an impact in Canada at this time.
The War Resisters Support Campaign in Canada has been taking great care of our GI resisters, but they need help with funds for the legal fight against more deportations. We could help with this too. If the Canadian government does order additional deportations, we need to be prepared to defend GI resisters who are court-martialed and imprisoned in the U.S.
www.resisters.ca

2. Campaign to support PFC Chelsea Manning, accused of being the whistleblower who leaked incriminating videos and documents about U.S. war crimes in Iraq. Private Manning is jailed in Kuwait and may soon be court-martialed on very serious charges. The Army will attempt to intimidate GIs who wish to follow international law, which requires that war crimes be reported. This is potentially an extremely important case, one in which the public support of VFP could make a real difference. We can help Chelsea Manning avoid years in prison, while sending a strong message to would-be military whistleblowers that they will have public support when they act with courage.

If Chelsea Manning actually leaked these videos and documents, she may have leaked the most important documents on U.S. war policy since Daniel Ellsberg released the Pentagon Papers in 1971. Ellsberg himself agrees with this assessment, telling the Associated Press that Manning “is the first person in 39 years to do something comparable to what I did—and really better than what I did, because it's current."

Taking up this one-two punch could be a powerful start for the GI Resistance Working Group. Defending Chelsea Manning might also be a good way to affirmatively reach out to active duty GIs, another of our goals. These are suggestions for our collective consideration, however. Nothing is set in stone. Please let us know what you think. 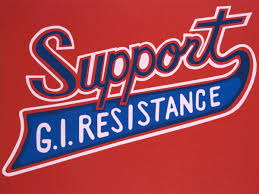