What Is It and What Does It Mean For Veterans For Peace?

Since the August 9, 2014 shooting of Michael Brown by police officer Darren Wilson, Veterans For Peace has worked closely with resistance organizing in Ferguson, MO. Our former Executive Director, Michael McPhearson, was asked to be a co-chair of the local Don’t Shoot organizing coalition responding to the situation, and he has done that. Since then, more than 20 VFP members have traveled to Ferguson to stand in solidarity with nonviolent protesters demanding justice and an end to longstanding and systemic oppression and police violence. 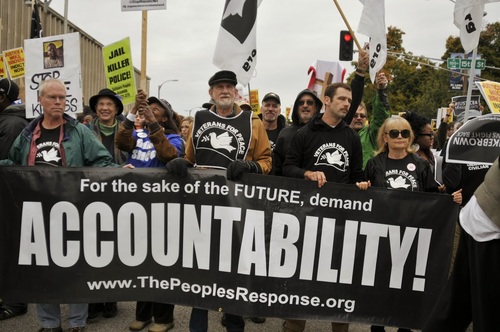 Veterans For Peace has a mission to end war and to heal the wounds of war.  The National Board, along with many other members, recognizes that the violence of war has been epidemic in this country since its founding. We acknowledge the 500-year war on the indigenous peoples, the ongoing war and racism against black and brown communities beginning with slavery, the long and ongoing history of racist immigration policies, economic war against the poor of all colors and we see the connection between the violence and police militarization here in the United States and U.S. wars abroad.

Veterans For Peace struggles to end war in all its manifestations, both at home and abroad, in an all-encompassing demand for peace. We call this Peace at Home, Peace Abroad.  This is not a new initiative, it is a new lens through which to see how we organize and talk about our work. We see the struggle for peace at home and our solidarity with communities here at home as a highly effective way to organize and build power to move our mission forward. .

Peace at Home, Peace Abroad asks us to speak to people about the domestic issues that are nearly always at the top of people's concerns.  Peace at Home, Peace Abroad attempts to help people see the connection between domestic and foreign policy, and how war and militarism negatively impacts both. This organizing strategy is directly connected with the larger mission of ending war.

On all these issues Veterans For Peace has relevant things to say and work to do that will help layout a clear anti-war and pro-peace argument.

Racism is a driving force for modern war,so it must be talked about and confronted. Veterans' unique perspective is in how racism is used to brainwash us into fighting and killing. Racist terms like “haji,” “towel head,” “gook” and “sand-nigger” are clear examples. Dehumanization is central to war fighting.

As for confronting racism, while VFP cannot lead the struggle against racism, confronting racism is the responsibility of any organization that claims to promote socio-economic justice or peace. We have that same responsibility to confront all forms of bias. This is why chapters and members righteously participate in Pride events, speak out against anti-immigrant laws and stand in solidarity with oppressed people on a host of other issues. 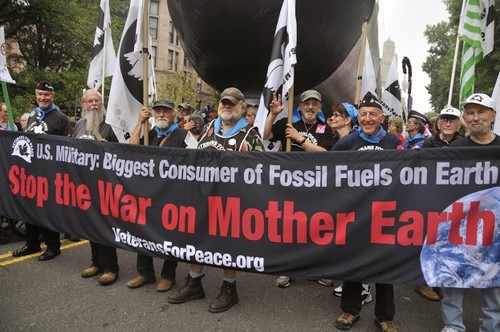 Do we take a lead on these issues? No. But we stand in solidarity

Demilitarization of the police is a new initiative that the national office is developing with the support of the board.The national office began to look more closely at this problem in May. Drone Free St. Louis asked Michael McPhearson to be on a panel about military equipment being used in U.S. streets. As he learned more about the 1033 program, whereby the Pentagon creates small armies out of local police forces, he was amazed to see the scope of police militarization and the communities most affected by this policing, such as Ferguson, MO. Demilitarization of the police directly confronts militarism and war.

Addressing climate change,VFP will not try to lead on climate change or on general environmental issues, but once again, we have much to say about the environment and the connection between militarism, war and climate change. The U.S. military is the largest single carbon emitter in the world. On that alone we have a responsibility to speak out, but as veterans we know it goes much farther. War generally poisons the environment through toxic munitions like depleted uranium and chemical warfare like Agent Orange and scars the environment through bombings or terrain degradation by heavy vehicles, in particular tanks, Bradleys, M88s and other tracked vehicles. 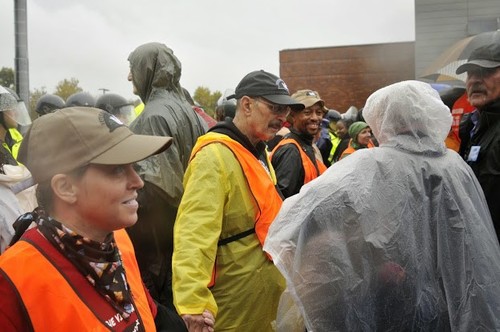 In photo: VFP Board members April Adams and Tarak Kauff and Executive Director Michael McPhearson at the Ferguson Police Station

Michael McPhearson, VFP’s executive director, is one of the leaders in the Ferguson movement. Michael has said, “Do you think I should have let all this happen around me and not be involved? That was really not possible for me. What would it say about VFP not to say anything about police in camouflage military uniforms confronting peaceful protesters and using force? What kind of legitimacy would VFP have to talk to struggling communities about war abroad when facing violence here at home? If we don't believe in peacemaking here at home I'm not sure our rhetoric about peace is real.”

We cannot win the fight to abolish war without solidarity on a wider range of struggles. The issues are not separate and the mother of them all of them is violence, militarization and war.  When domestic street violence is on VFP's doorstep, shall we turn our backs and pretend it is not happening? What is needed in St. Louis and Ferguson are prayers and people, veterans committed to justice and to ending war, not just abroad but here at home.

Everything is connected. What we do at home affects how we are understood abroad. And how we are understood abroad affects our ability to influence world events including wars and the use of violence. It has not been unnoticed by the world community that our country often chastises others while mistreating and denying equality to our own citizens, especially the poor and people of color. In most of the world people of color and the poor fight the wars for the rich. 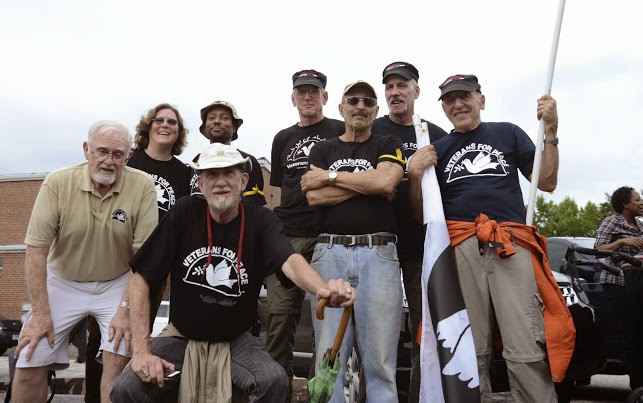 VFP's mission will not change. The costs of war are felt at home through poverty, racial inequality, collapsing inner cities and infrastructures, lack of universal health care and quality education and so forth. It is all connected. As we explain the connection and as we stand in solidarity with people struggling for justice right here at home in their communities, we will build VFP and the movement for peace and justice and the possibility of ending war will greatly increase.