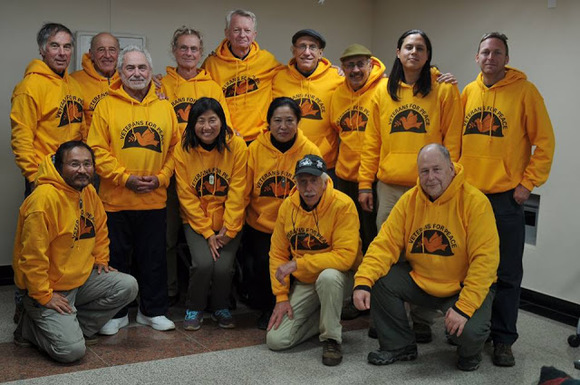 Report Back from Jeju Island

There are numerous articles w/pictures both in print and online. The police were very happy to see us go, I am sure, however in every other way we were warmly received and our real solidarity was quite deeply appreciated.

The Korean left, anti-capitalist, anti-imperialist resistance has been very strong in Jeju for many years, decades, and they have suffered for it, much like the Palestinians. We had a great deal of respect for the deep experience of people we met and we learned much.

There is a good possibility of forming a Jeju Island VFP RK chapter which I think would be advantageous for all of us. More on that when we return.

So much of a strong positive nature has occurred on this trip and to me, not the least of which was seeing (and hearing directly from them) hoe much this has inspired Will  Griffin and Mike Haynes our two younger vets from San Diego. Our oldest member, Stan Levin, a Korean War Navy vet who participated in Commando raids very deep in the north has said, if he knew then what he learned on this trip he would have become a conscientious objector then. Stan was absolutely blown away by what we experienced. Barry will find out soon as Stan should be back in San Diego tomorrow.

The rest of us are in Okinawa now relaxing in the very Japanese style, totally efficient small individual rooms we are staying in for tonight.

Video by Delegate, Will Griffin