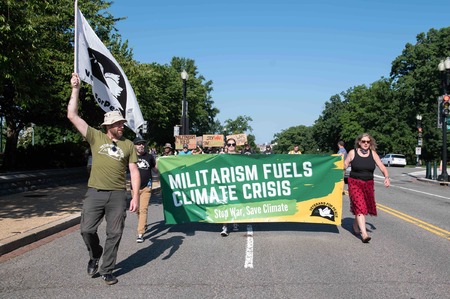 This project is designed to alert the public to the connections between the ongoing climate crisis and militarism, especially the war in Ukraine, by having veterans risk arrest to stress their commitment to the message. Even though the U.S. has finally passed a climate bill in the form of the “Inflation Reduction Act of 2022,” the $369 billion energy and climate portion of the bill allocates far less than the U.S. is projected to spend on its nuclear forces alone between 2021 and 2030 and is less than 1/30th of projected military spending during the same period. This ratio of military to climate mitigation spending cannot continue if the U.S. hopes to uphold its commitments made in the Paris Agreement at COP21.

Below are links to descriptions of recent actions by VFP members and their allies. If you or your chapter wish to join in these actions or conduct your own, logistical support and training are available. For more information, please fill out this form, or contact Jim Driscoll at jimwdriscoll@gmail.com.

Actions to Stop the War, Save the Climate!

The below actions were made possible in part by support from the Climate Emergency Fund, which provides funding for climate activists on the vanguard of the climate emergency movement.

Click on any of the photos below or follow this link to view the full photo album! 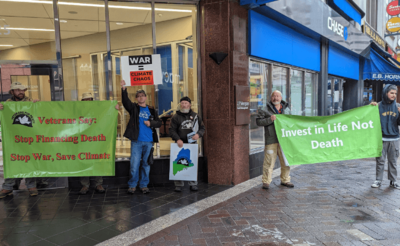 30 VFP activists and allies, including 9 military veterans, blocked the main entrance at Boston's Chase JP Morgan Downtown Crossing location during the 12 PM lunch rush. VFP members used a large banner that read "Veterans say: Stop Financing Death. Stop War, Save Climate" to obstruct the glass doors leading to the main banking lobby. The group sung, chanted and testified using a megaphone. Hundreds of informational fliers were handed out to passerbys. Some customers were confronted and asked to divest from the bank until they divest from death. Chase JP Morgan is one of the leading financiers for fossil fuel companies and war profiteering corporations. 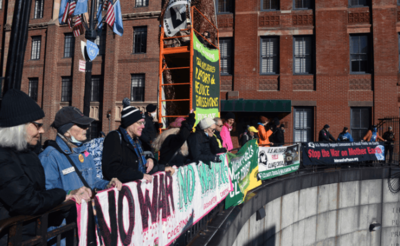 From Jim Rine: On a sunny but cold autumn morning, a group with banners and signs protested outside the US Mission to the UN, while a small crew assembled a mock "observation tower" above the Isaiah Wall across from the UN HQ. The protest outside the US mission, a diversion to draw the attention of the NYPD, proved unnecessary, perhaps because the police thought the tower was part of a movie being filmed in the area. Weeks of planning meetings and discussions resulted in an excellent action, an accomplishment thanks to the support of NYC VFP Chapter 34.

Once protesters moved to the tower site by the UN, speakers from organizations participating, including CodePink, VFP34, Extinction Rebellion NYC, and New York State Peace Action, highlighted the injustice of excluding military emissions in the COP21 Paris Climate Agreement and not making reporting mandatory at COP26 in Glasgow. This is especially critical for the US military, the world's largest institutional GHG emitter and a larger emitter than most countries. The street musician, Dragon, enlivened the event the event between speeches.

Listen to the Podcast from Bar Crawl Radio: Veterans for Peace & the Climate

Photo credit: Ellen Davidson - Check out the rest of the NYC photos with captions telling the story 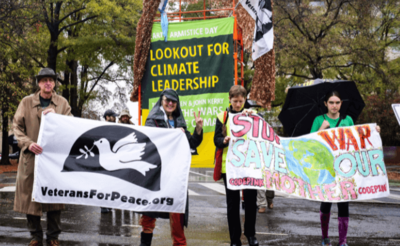 On November 11th, VFP and allies convened at the US State Department Headquarters to call on the US Government to live up to its rhetoric by disclosing the carbon impacts of military operations and taking meaningful action to address the climate crisis. Saturday, November 12th was clear, cool, and sunny. …the weather was warm enough to expose the t-shirts of various groups, such as Fridays For Future, Sunrise Movement, Extinction Rebellion, CodePink. After speeches, readings, chants, and songs the assemblage marched down Constitution Avenue to Union Square for the rest of the program, which included painting a huge circular street mural that read “STOP WARS SAVE THE CLIMATE." 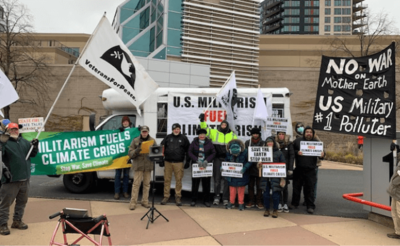 Veterans For Peace, Chapter 27 in Minneapolis, held a demonstration in front of Senator Klobuchar's office on Nov 11. Barry Riesch, a member of VFP's national Climate Crisis and Militarism Project, delivered the letter to Senator Amy Klobuchar's office. Barry had also delivered the same letter and the statement from the Stop the War/Save the Climate action with arrests in Washington, DC to Congresswoman Betty McCollom's office on Nov 7, 2022. 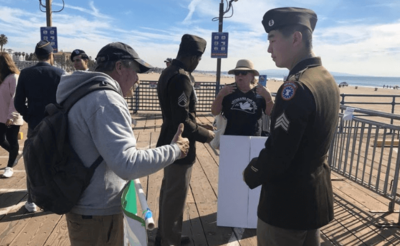 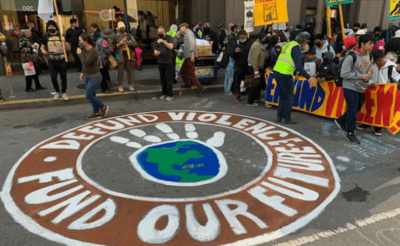 On November 10, Veterans For Peace (VFP) was part of an event in the Bay Area with the theme "COP27: Militarism Fuels Climate Crisis" led and organized Youth vs Apocalypse (YVA). There was a special focus on Lockheed Martin, the world’s biggest war contractor. At least, two-thirds of the 300-400 participants were youth. The colorful high-energy march featured speakers at a military recruiting office, a street mural painted in front of the Lockheed Martin office by students with artivist David Solnit that read “DEFUND VIOLENCE-- FUND OUR FUTURE”.
VFP and CODEPINK members risked arrest by attempting to enter the building to deliver a petition to Lockheed calling for conversion to useful civilian products. They were blocked by Security, who announced that the building was on lockdown.

Planning an event and need graphics?
Find templates and other helpful links here!