Friends,
We will be meeting tomorrow (Wednesday) at 5p.m. in Albany in Townsend Park to discuss what we can do as a community of friends and fellow activists to support Elliot Adams and perhaps take part in this action so he does not have to continue alone. We would like to make it possible for his body and soul to take a break to renew and recharge, while those of us willing and able carry on with this cause and generate more public awareness. Please join us if you can. If it is raining, we will meet in Lazeez, or the Social Justice Center. Call 399-7118 or 364-6064 (Pete Looker) if you need more information.
Peter Looker 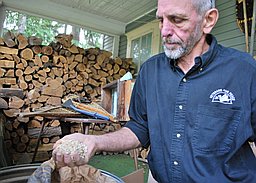 Elliott Adams scoops out a handful of oats from the 50 pound sack on his porch. He's been on hunger strike in solidarity with the prisoners of Guantanamo Bay since mid May, eating only a handful of oats each day.

Three weeks ago, the Sharon Springs resident and past Veterans For Peace president had a sturdy 170-pound frame, but that was before he stopped eating.

“You got to do what you got to do,” he said, moving slowly through his house Monday afternoon.

Adams is on hunger strike in solidarity with the suspected terrorists being held at Guantanamo Bay. He’s hoping his actions will help sway the American public so strongly against the prison that the U.S. government will finally shut it down.

More than 100 Guantanamo prisoners have been on hunger strikes for months with a similar goal in mind, but even after just 18 days, Adams showed clear signs of starvation.

A button-down shirt and worn work pants hung slack around his body, the shape of his skull starting to make itself visible through his skin.
“I look at my legs and I think, ‘Whose legs are those?’” he said.
In sentences slurred by a brain starved of calories, he laid out key components of his cause. No single event prompted the start of his hunger strike, but rather a critical mass of horrific news from the prison.
“What’s going on is against international law,” he said. “It’s against U.S. law. It’s against common law and it’s against everything we like to believe this country stands for.”
He went on to say that many of the prisoners were never actually terrorists and have been cleared for transfer, “but there they still sit, with no proof against them, unable to see their lawyers without going through invasive searches designed to violate their religious beliefs.”
He means to bring attention to the cause with his own and the fasts of fellow activists Brian Willson and Diane Willson in Portland, Ore., and Washington, D.C., respectively. The problem is, hunger strikes work only with publicity and getting attention is taking longer than he thought.
“Right now we don’t have the communication networks to really reach critical mass with the American people,” he said.
At his current rate of losing a pound and a half a day — hitting 149 pounds Monday morning — he said he’d “die before anything happened with Guantanamo.”
Staying alive
In order to stay alive until people start to notice, certain precautions are necessary.
In the small kitchen at the back of his house he readied one of his daily meals, filling an old pop bottle with water and a splash of Pedialyte, a cocktail of electrolytes designed to keep infants hydrated through bouts of diarrhea.
“I have to drink a gallon of water a day,” he said. “The process of breaking down my muscles for fuel creates certain chemicals which could ruin my kidneys. I have to wash them out.”
He sipped the concoction, which looked like apple juice or flat beer.
About a week ago, he added a daily half-cup of oatmeal to the usual water regiment to lengthen the fast.
Even with the oatmeal, his health could be permanently ruined by the fast. Worries include brain damage, kidney and general organ degradation and heart failure.
“Most of the people who love me are really mad at me,” he said.
His wife, Ann, is one of the few still supportive. She’s known locally as Saint Ann, largely for sticking with Adams through 40 years of activism.
“I can adapt well,” she said in passing.
Adams himself didn’t seem all that concerned about his own hunger or the possibility his heart might stop. His is a specific blend of national and personal conviction.
Like most Americans, he sees the country as a place of justice and morality, but unlike most Americans who still enjoy the regular cheeseburger, Adams feels like he has a price to pay.
Nearly 50 years ago, he was a paratrooper in Vietnam, then Japan and Korea.
“I went to war because I thought it was right at the time,” he said, “but it was wrong. What I did was wrong. I have amends to make.”
Those amends, he figures, involve stopping wars and closing down Guantanamo.
Realistically, his body will give out long before any prisoners are released. He plans to hold to his hunger strike until he feels enough Americans care enough to start a self-sustaining movement.
“The government is afraid of losing votes,” he said. “If everyone in this country wanted the prison shut down, it would be, regardless of any law.”
As his strike continues, Adams said his progress will eventually be posted on closeguantanamo.org.