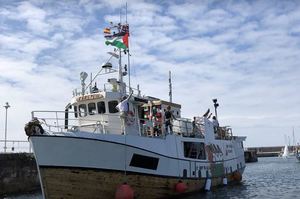 Veterans For Peace calls on the Israeli government to immediately release all occupants of the Al Awda, a vessel of the 2018 "Freedom Flotilla", and for immediate delivery of the medical supplies carried by the Al Awda to their intended recipient; civil society in Gaza.

We condemn the refusal of Israeli authorities to allow ships and ground shipments into Gaza for humanitarian aid. The occupation by Israel of Palestine has imprisoned millions of people for far too long. It has caused untold misery and must end. Stopping the blockade and human suffering in Gaza is an urgent human rights issue that must concern us all.

We call on the U.S. State Department to advocate for the release of occupants of the boats, including the U.S. citizens aboard and to work for an end to the Gaza siege.

Veterans For Peace strongly endorses this call from Israeli organizations, both Palestinian and Jewish, to support the flotilla and for an end to this humanitarian crisis

The flotilla to Gaza is a brave act of political protest, which expresses solidarity with the Palestinian people and the opposition throughout the world to Israeli occupation policies, the ongoing siege on Gaza and the collective punishment of civilians.

Today the Gaza Strip is a massive prison for its 1.5 million residents, for whom basic rights are denied. The right of the Palestinians in Gaza to maintain direct contact with the outside world, their right to open their port, their right to receive and send ships, their right to import and export goods and to develop their economy, precisely as for Israel these rights exist. The state of Israel must end its direct and indirect control over the Gaza Strip, as part of its obligations grounded in international law and to end its occupation regime over the Palestinian Territory and to permit the independence of Palestine.

We emphasize that in contrast to government declarations, the very act of the flotilla is a non-violent one, and in case of an attack by the army the activists are preparing for opposition that is also to be non-violent. In an announcement from one of the members of the international coordinating team of the flotilla, which was issued in response to claims of the security apparatus in Israel, it is explicitly noted that "there are no weapons on any of the ships, and on board all of them are tens of international journalists who can attest to this. The passengers undergo training in non-violence and sign a commitment not to use violence."

We denounce attempts of the government of Israel to create an atmosphere of fear of the flotilla and to discourage participation in it. The government of Israel wishes to create an unfounded atmosphere of fear through knowingly spreading lies about the so-called preparations for violent resistance to kill soldiers, and the intention of peace activists participating in the flotilla to bring weapons with them to Gaza; in parallel, it is exerting unprecedented pressure on international journalists, lest they join the flotilla in order to cover it. This media campaign, intended to sow fear and hatred in the Israeli public, further arouses suspicion that an additional goal is to justify the harsh and dangerous results which are liable to occur in case of a violent takeover of the ships and harm to their passengers.