The General Assembly of the United Nations has declared the 21st of September as an International Day of Peace. This day is devoted to strengthening the ideals of peace, both within and among all nations and peoples. The theme of this year’s commemoration is“Partnerships for Peace – Dignity for All”which recognizes the importance of all segments of society to work together to strive for peace.

As military veterans we have made waging peace, our primary mission since 1985. Veterans For Peace recognizes that continued conflict in our communities and around the world serve no one except the military masters and war profiteers. Armed conflict only leads to increased suffering, devastation, injuries and death for those impacted by war making.

As veterans we have served our country and now believe we have a greater service to our communities and global neighbors by proclaiming and demonstrating a higher responsibility towards ending conflict and global crisis through a culture that recognizes the dignity of all people. 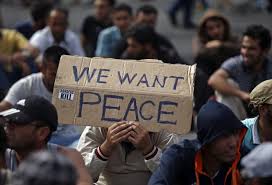 To that end, we call upon our members, fellow veterans, supporters and greater communities to move beyond talk of ending conflict, and instead adopt and implement practices that embody peace at home and abroad. We cannot remain passive while powers seek to oppress others through violence or the threat of violence.

As Veterans For Peace we urge communities, governments, schools, places of worship and individuals throughout the world to partner with one another in commemorating this International Day of Peace and work together towards establishing a world that celebrates not only a day of peace, but rather a life of peace and a world free of conflict. 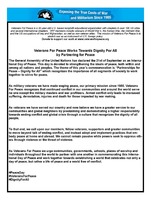