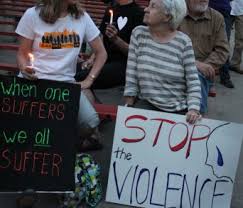 We at Veterans For Peace call on all to turn away from violence and seek peaceful means for a just change. We know war and violence are not the answer. Our members have dealt in violence and killing as a profession, and we know the moral injury and suffering it brings. We know that violence leads to more violence, which can easily spiral out of control into a cycle of death. Only those directing the violence benefit from it. Those of us who do the killing and dying—combatants or innocent victims caught in the crossfire, gain little if anything and are forever scarred. Whether it is the streets of Orlando, St. Paul, Dallas and Nice or Baghdad, Aleppo and Kandahar. We call on the world to work for global peace based on justice in each and every community as the means to end this cycle of death.

July has seen immense death and destruction from violence by war, terrorism and police repression. And while the news media in the U.S. provide hours and hours of coverage of the tragedies in our country and Europe, by far the greatest numbers of people facing this violence and dying from terrorism are in places like Baghdad, Iraq; Aden, Yemen; and Dhaka, Bangladesh. More than 80 incidents are outlined on a Wikipedia page titled List of terrorist incidents in July 2016. This international violence, along with the recent ongoing police violence here in the United States and subsequent killing of police officers in Dallas and other communities, has made July 2016 a heartbreaking time. In the dark shadow of the horrible mass shooting in Orlando, the ongoing violence in our communities nationwide, such as shootings of civilians by police, necessitates that we begin to examine what is happening in our global community. We must look at these incidents not as isolated and separate from each other, but as one intertwined challenge. We must begin to understand that we have created a global culture of violence. That leaders around the world have failed the common person. That we the people of the global community must come together and confront our differences. If we continue to follow those who have brought us to this point, then there will only be more violence and deaths.

Martin Luther King Jr. wrote, “We must learn to live together as brothers or perish together as fools.” Let us not be fooled by those who are leading us down a path of division and hate. Veterans For Peace calls on everyone to put forth at least as much effort and resources toward understanding each other as we have toward hurting and killing each other. We believe peace is possible and working together we will bring about the world we seek, i.e., peace at home, peace abroad.

Veterans For Peace would like to express deep sadness at the violence and loss of life that has spread like a plague around the globe. We express our heartfelt sympathies to all who have lost loved ones. We call for an end to violence at home and around the world.

Veterans For Peace condemns Newt Gingrich’s call for a test of every U.S. Muslim and deportation of those who do not pass this test. It is a prime example of cultivating division and demonizing whole communities. Gingrich and others who call for similar responses to acts of violence are leading the world down the same ruinous path of dehumanization, violence and war that we have followed since the U.S. invaded Afghanistan and Iraq.