Veterans For Peace is closely following developments in Ferguson, MO and the surrounding Saint Louis Region in the aftermath of the killing of unarmed 18 year old Michael Brown Jr. by Darren Wilson, a Ferguson police officer. Having already called for de-escalation of the use of force against protestors and the unrest on Friday, Veterans For Peace members are outraged that Missouri Governor Jay Nixon has called in the National Guard, setting the stage for U.S. military and citizen confrontations.

Veterans For Peace calls on the Governor to rescind his order to deploy the National Guard and instead turn to real de-escalation tactics of talking to the community and moving forward with justice for Michael Brown Jr. Darren Wilson should be immediately brought into custody to help ensure his safety and reassure the public he cannot flee.

“This is appalling but not entirely surprising. The mindset of our government officials both at the national and local level is that force is the answer to almost every problem. The truth is that there is not a military solution to this face off in Ferguson,” said Michael T. McPhearson, Veterans For Peace Executive Director and Saint Louis resident.

He goes on to say, “After years of mistrust and abuse by some police officers, the only the solution to the unrest is transparency, the immediate arrest of Darren Wilson and a swift and fair investigation.”

National Veterans For Peace board member Tarak Kauff, in Saint Louis to stand in solidarity with the Ferguson community and the Brown family, commented, “Calling in the National Guard, even more military force, is not the answer. It was not the answer before when the militarized St. Louis County Police used it so why would more force now be the answer? Why is the police officer who killed Michael Brown not arrested? That in itself would ease tensions considerably. Force is not the answer. We need the justice process to be carried out and respectful dialogue, not military occupation.”

Veterans For Peace has joined with a coalition of groups demanding justice for Michael Brown Jr. The groups are calling for an immediate meeting with Governor Nixon at 3 pm today to pressure him to recall the National Guard and use community trust building strategies, not force, to end the confrontations.

Our nation’s consistent option for militarization and the use of deadly force when it is not needed – at home and abroad - is exactly why we find ourselves in this situation. It makes no sense to think more violence and trauma heaped upon the Ferguson community will quell the unrest. The Governor has moved beyond using a militarized police force to using the military. He is relying on intimidation and fear to end this. The only thing that will quiet this storm is justice. 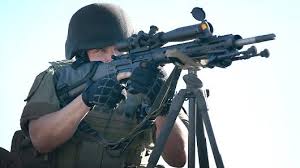 Marine veteran Tyson Manker (below) greets protesters in Ferguson, Mo. "I have a problem with weapons of war now being used at home on peaceful protesters," said Manker. 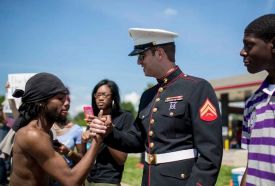 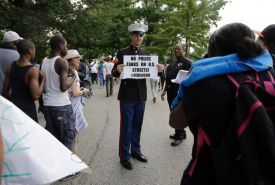