The terrorist attacks in Paris seem to have had their desired effect.  The French government has responded by declaring a three month state of emergency, curtailing civil rights and freedom of speech.  Hundreds of Muslim families there are being terrorized in midnight raids.  Climate change activists planning peaceful protests at the Paris climate change summit have been criminalized.

Like sharks smelling blood, one European country after another targeted Syria. French President Francois Hollande immediately stepped up French bombing raids. Germany followed suit and pledged 1200 combat troops for duty in Syria, ignoring its constitutional prohibition on deploying troops abroad.  Not to be left out of the rush to mayhem, the UK government quickly debated, voted and set its own air force to bombing in Syria.

Throughout Europe, right wing, anti-immigrant parties spouted alarmist rhetoric against the huge influx of refugees from Syria and other war torn nations in the Middle East, gaining popular support in the process.

In the U.S., the same neocons who set these catastrophic events into motion with the 2003 U.S. invasion and eight year occupation of Iraq, are pushing for yet more war.  And why not?  What looks like disaster to most of us has arguably been a great success for the neocons.  They have achieved their goals of toppling strong nationalist governments in Iraq and Libya, rendering them helpless to resist foreign intervention. The next prize, a decapitated and dismembered Syria, seems within reach. All the while, their pals in the arms business are enjoying a huge bonanza.

Apparently bowing to pressure from the media, the Congress, the Defense Department, and from the neocons in his own administration, President Obama has agreed to send a small contingent of ground troops to Syria.  Defense Secretary Ashton Carter referred to them as a "specialized expeditionary targeting force" (only about 200 or so troops, we are told). The mantra that “there is no military solution” has been replaced by “at least, not without boots on the ground.” 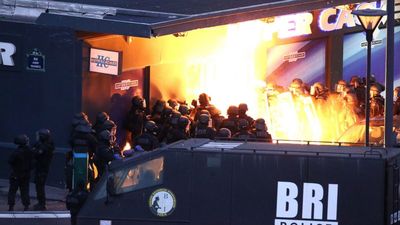 Obama is also publicly defending Turkey’s brazen shoot-down of a Russian warplane near its border with Syria, the first time that a NATO country has downed a Russian plane in 50 years.  The plane crashed into Syrian territory after being shot down by a U.S. supplied F-16 fighter jet. A Russian helicopter coming to the pilot’s rescue was then shot down by Turkish-backed Islamic rebels using a U.S. TOW missile. The U.S., Saudi Arabia, Turkey, France, Germany and Great Britain are all dedicated to overthrowing the Syrian government, and so are often colluding with the very rebels they claim to be fighting against.  The Al Qaeda branch in Syria, Al Nusra, is now among the so-called “moderate” rebels who should not be attacked by western powers.

The war at home in the U.S. seems to be keeping pace with the war abroad.  There are more police killings of African American youth, and credible allegations of police cover-ups in Minneapolis, Chicago and many other cities across the country.  Mass shootings have become an everyday occurrence.  The latest massacre, in San Bernardino, California was apparently carried out by a young Muslim American man and his wife.  Even before this horrible event, racist attacks on Muslim people and Mosques have been on the rise.  The relatively small number of Syrian refugees that have been allowed into the U.S. are being greeted by xenophobic Republican governors who say they are unwelcome in their states, echoing presidential aspirant Donald Trump, who says that, if elected, he will throw them all out of the U.S. and put all Muslim Americans in a special database.

So this is an awful lot of bad news.  It should at least be clear now that the struggles for Peace Abroad and Peace at Home are linked arm in arm.  The good news is that many thousands of people in Europe, the UK and the U.S. are not buying into war and racism.  They know it is not in their interests or in the interests of the future of this planet.  Many young people are creatively participating in the climate change movement, while making connections to war and militarism.

Our own members of Veterans For Peace are in the streets in Chicago, in Minneapolis, at Fort Benning and Fort Stewart, Georgia.  This week, a Veterans For Peace delegation arrived in Jeju island, South Korea, to join in the daily, eight-year long community resistance to the construction of a deep water naval base.  Next week VFP members will join resisters to U.S. base expansion in Okinawa, Japan.  We are making strong links around the world, while making links to critical struggles for peace and justice in our own communities.

It certainly does look like things might get worse, perhaps terribly worse, before they get better.  But Peace IS Possible.  Veterans For Peace has a special role in acting for peace. We continue to go out and make our voice as veterans working for peace heard. We will tell our own stories in order to help other people overcome their fear to push our political leaders to make wise decisions that will actually bring about peace. If we believe it.  If we live it.  If we act on it.  If we make it so, there will be peace.