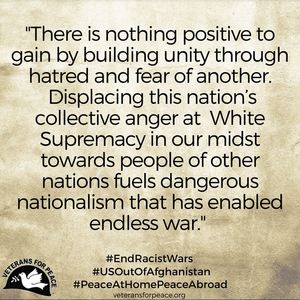 This past Monday, Trump addressed the nation about Afghanistan. The president’s speech at its core is more of the same disastrous policies that we have seen for sixteen years, except this administration wants to completely abandon pursuit of a political solution and shroud the war in a cloak of secrecy.  Veterans For Peace, once again, calls for a different direction other than war.  We call for U.S. troops to leave Afghanistan and a robust pursuit of a political solution to end the war.

It is not surprising that Trump began this speech by attempting to rectify his inability to speak out directly against White supremacy.  Instead of speaking unequivocally as president against ideologies of hate and White supremacy, he attempted to wrap himself in patriotism and the blood and sacrifice of fallen soldiers. In doing so, Trump attempted to sidestep his own culpability in the rise of hate and intolerance in the United States. In fact, we see that Trump only knows how to divide and fear-monger. His urging everyone in this country to come together against a common foe is no different than his campaign rhetoric using fear to call for unity against Muslims, immigrants and people of color.  Now he is using fear of people in another country to wage endless war.  We, at Veterans For Peace, have seen this tactic repeatedly.  There is nothing positive to gain by building unity through hatred and fear of another.  Displacing this nation’s collective anger at White supremacy in our midst towards people of other nations fuels dangerous nationalism that has enabled endless war. Further, we see by Trump’s speech the next day in Phoenix that his words of unity here at home are hollow.

Endless war is the plan that Trump laid out Monday.  In this regard, there are few differences in the approach of the prior two administrations. The policy differences that do exist will not change the reality of what is happening in Afghanistan and will continue to ensure more death for U.S. troops and the people of Afghanistan.

Veterans For Peace is alarmed by the policy changes outlined.  Trump indicated that a political settlement with the Taliban will not be sought and that the focus will be on military options.  He also blatantly stated that the U.S. public will not be given a basic outline of plans in Afghanistan.  Both policies are dangerous.  Cloaking the war in Afghanistan in more secrecy, in a time when increased privatization of our armed forces is being considered, diminishes accountability and gives the U.S. public no idea of what we are being asked to commit to war.  Moving away from a pursuit of a political solution and giving commanders on the ground more leeway to use force will more than likely lead to more civilian deaths with little chance of significantly increasing the possibility of the U.S. militarily defeating the Taliban. The two previous administrations put little real effort in a political solution, but complete abandonment can only mean prolonging war and more bloodshed.

Veterans For Peace also condemns the aggressive and needlessly antagonizing language towards Pakistan, especially given our long history of drone warfare in the country that has killed innocent civilians and violated their borders.  Previous administrations have sought a balanced approach to Pakistan and India, two nuclear powers with a fragile relationship. Trump’s highlighting of India’s benefit to the U.S. economically and invitation to be more involved in Afghanistan appears to be favoring India and to punish Pakistan. It is hard to see a positive outcome of framing the U.S. relationship with Pakistan or India in the context of moving closer to one and distancing the U.S. from the other.

Trump’s speech admitted no culpability in the role of the U.S. in destabilizing the entire region, alternating between blaming Afghanistan and Pakistan. The U.S. military has destroyed countless villages and continues to create an atmosphere of fear and hatred with covert drone operations that kill thousands of innocent people.  It should be clear after sixteen years and the death of tens of thousands of people that no one is a winner in Afghanistan. There is no clear concept of what it means to win there. In fact, it is no longer clear why the U.S. continues to keep troops in Afghanistan after sixteen years of failure.

Veterans For Peace calls for a different direction than more war. We call on Congress to stop funding war and demand a plan for a peaceful solution. We call on the president to immediately begin withdrawal of U.S. troops and take a new direction towards diplomacy and peace. And we call on the people of the U.S. to resist war and demand policies that foster peace and prosperity at home and in Afghanistan.